How does Romney measure up?

To follow up on my post about how Romney is doing so far, the following seems like a good point of comparison. It's the share of the delegates held by the main four candidates in the 2008 Republican presidential contest at the end of Super Tuesday (2/5/08). The information comes from RealClearPolitics: 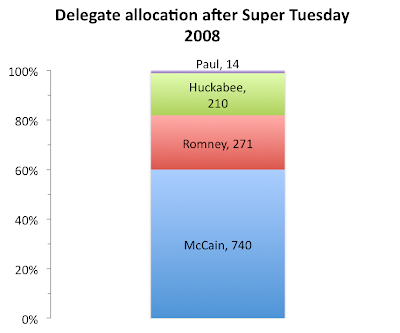 Again, Super Tuesday 2008 isn't a perfect point of comparison with Super Tuesday 2012, as a lot more states had their contests in the former year, but it's a rough parallel. As we can see, McCain held about 60% of the delegates by this point.

Compare this to 2012. According to RCP's numbers, Romney has 381 of the 881 delegates that have been contested -- that's about 43%. So yes, that's lower than McCain's share by this point. But again, the rules are very different this year. More states are using some form of proportionality, whereas more contests were winner-take-all four years ago. So what if the states were all using winner-take-all this year? Here's what it would look like, assuming the plurality winner in each state got all the state's delegates: 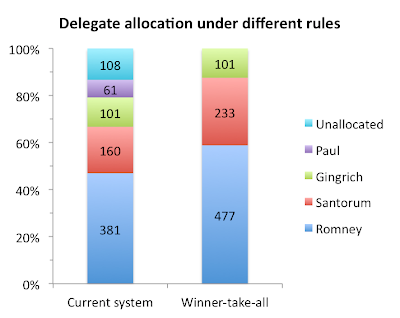 Yes, Romney would have about 60% of the delegates, just like McCain did four years ago. Santorum would actually be doing slightly better than he currently is. Gingrich would have the same number of delegates, and Paul would have nothing.

Now, there are all sorts of reasons why this is an imperfect analysis. For one thing, RCP (and other organizations) are making a lot of assumptions when they calculate delegate shares, and these assumptions may turn out to be wrong. Additionally, the caucus states usually end up producing delegates who support the eventual nominee, although there's no reason that has to happen this year. And this doesn't really account for the superdelegates. Furthermore, the system four years ago wasn't entirely winner-take-all. Finally, it's not like John McCain's nomination was all that typical!

Still, I think this should give us some confidence that, if not for some changes in the calendar and delegate allocation rules, Romney would be broadly considered to be in solid shape and a strong candidate. And even with the new rules, he's still looking pretty good. He is hardly flawless as candidates go, but we shouldn't blame him for institutional rules outside his control.