Oh, I have got to watch this. From the Slate review:

It finds shark expert Craig Ferreira gearing up a vacation with his family of five in South Africa's Shark Alley, notorious for its concentration of great whites. "In preparation for the trip, Craig has a surprise for his children," says the anemic narrator. "Craig wants his boys to observe sharks on their own terms, and to do this, he has designed the first-ever children's shark cage." On the preview reel, Craig unloads the cage in his driveway and his wife says, "That. Is. Awesome."

"The boys are very excited," Craig says. I won't argue the point: Once the cage was settled in the backyard hot tub, and the boys were caged in it, they scampered about like monkeys on a jungle gym. But the sober narrator intervened to remind us that this isn't all fun and games: "Once out at sea, it will be a big psychological challenge for the boys." Adding depth to the daddy issues, we have Craig's father, Theo, said to hold the world record for single-handedly killing great whites. Theo is a touch saddened to say that he approves of the work Craig put into the cage: "It's far better than I'd thought it'd be. … I came here to criticize." Wouldn't it be great if you own parents were that straightforward? Friday, August 3rd, on Discovery. Be there.

Pew recently conducted a pretty fascinating survey in which they asked registered voters to evaluate the presidential candidates in terms of their ideological positions. Check out this graph:

Among Democrats, Edwards is perceived to be the most conservative. Both Republican and Democratic respondents agreed with this ranking. This is fascinating because, if you've been listening to the guy talk about the war or about poverty, you know that he's probably the most liberal of the leading candidates. All this testifies to the power of demographics. Voters look at Edwards and see a white male with a southern accent - they infer that he's more moderate than the female or black candidate.

This is a totally unfair advantage for Edwards, but it is what it is. And what that means is that the party could nominate him and get the liberal policies it wants without most voters thinking the Democrats have gone socialist.

These are for guys who want to read the new Harry Potter book but don't want to be caught doing so. Click on the example above to see more. (Hat tip to Lidzville.)

Why Republicans should support impeachment

Let's just stipulate that President Bush has claimed an unprecedented collection of executive powers. He has asserted:
Maybe you feel he did all these things to protect our country, and that he was justified in doing so. Fine. But let's also stipulate that presidential powers, once claimed, rarely disappear. And let's further stipulate that there is at least an even chance that the Democrats will take the White House in 2008.

Do you really want a Democratic president to have these powers?

The only way to make sure that these powers do not remain part of the presidential toolbox is for Bush to pay some kind of price for claiming them. A low approval rating is not enough. Impeachment - even if he is not subsequently removed from office - is a fair price. It remains in the history books for all time. It is something that future presidents will try to avoid. 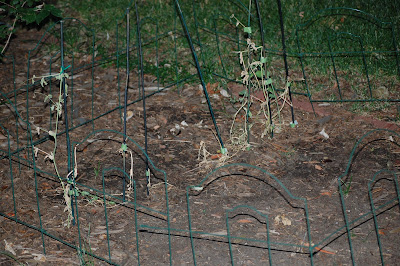 I find it pretty annoying that torture has become so popular today - mainly, though not exclusively, among Republicans. You can understand where this comes from, though. Shows like "24" do a great job portraying torture. I mean, torture is such a perfect device for film and television. It's both a physical and a psychological battle. One side has an overwhelming physical advantage, but the psychological advantage can go either way.

Now, the problem with "24" is that torture, when performed by Jack Bauer, almost invariably works. Jack figures out the weakness and exploits it, and the detainee provides the information. As we now know, however, torture is terribly ineffective. It's far more likely to produce inaccurate intelligence than truth - people will confess to anything to stop the pain.

This is one of the reasons I love the movie "True Romance." It contains one of the few on-screen torture scenes in which torture actually doesn't work. In the following scene, Christopher Walken is interrogating Dennis Hopper. Beyond the delight of watching these two actors work together, you see a great mind game going on. Hopper determines about halfway through the scene that there's no way he can win. He can't lie, and he's not going to give up his son. What's more, he figures he's going to die anyway. So he decides to just insult Walken. And Hopper gets the psychological victory.

I've been rather slow to call for Bush's impeachment, for two real reasons. One is that I think the Republicans ruined impeachment in the 1990s. That is, by trying to remove a president for committing perjury in a small civil case about sex, they turned this awesome congressional power into a cheap partisan trick. Now anyone who calls for impeachment can be derided as a similar partisan hack. The second reason I've opposed impeaching Bush is that I thought Democrats would pay a price for it. Republicans lost seats in 1998 in part because of their impeachment fever. I didn't want Democrats to lose control of the Congress because of this.

But now I'm starting to think that the impeachment of Bush wouldn't be such a bad thing. For one thing, there'd be very little blowback over it. Bush is incredibly unpopular, and four in ten Americans support the idea of impeaching him.

The tricky thing would be coming to an agreement on what he should be impeached for. I know a lot of Democrats want him impeached because he lied us into war. I disagree with that approach. I believe that impeachment should be limited to cases involving serious breaches of the law. As repugnant as the adminstration's actions in getting us into the war were, they did not, as far as I can tell, involve breaking the law. Yes, starting unnecessary wars should be grounds for losing the presidency (and maybe even grounds for prosecution by the International Criminal Court), but the place to do that is at the ballot booth, and Democrats blew that shot on 2004.

There seems to be no question, however, that Bush broke the law with his warrantless wiretapping program. Whether the FISA law was obsolete or not, a president does not get to ignore federal law because he finds it inconvenient. Bush's actions violated the 4th amendment to the Constitution and the FISA law. That's more than sufficient grounds to impeach a president.

Now, in reality, even if the House were to impeach Bush, the Senate is very unlikely to remove him from office. I understand that. But impeachment would be a stain on the man that would remain part of his legacy. Clinton will be remembered for hundreds of years as only the second U.S. president to be impeached, and all because he lied about getting blown. Shouldn't Bush at least have such a mark on his permanent record?

I'm writing this on my new MacBook. It's been a slightly tricky transition - some keystrokes I've been using for over a decade no longer work. But I've been very pleased overall. The Mac just works. When I plug in my external firewire hard drive, it doesn't immediately rummage through the entire drive contents and then beg me to tell it what kind of media it is. It just makes the drive immediately and conveniently appear on my desktop. It also works very nicely with PowerPoint demonstrations in class, flipping seamlessly between my monitor and the overhead projector without needing excessive keystrokes or a restart. I'm very, very happy with this little Apple. 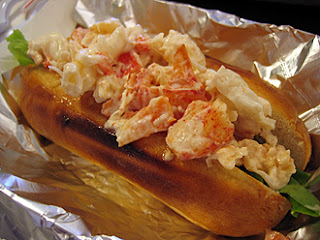 I just got back from an extended visit with the in-laws in New Hampshire. One of the greatest things about the New England seacoast in the summer is the lobster roll. It's a bunch of lobster meat mixed with mayo and served on a buttered, toasted hot dog bun. It's bliss.

And it's usually cheap. During recent visits, we've gotten lobster rolls for usually around six or seven bucks apiece, maybe around ten dollars in the nicer restaurants. Not this time. Apparently, the lobster industry had a rough spring, and lobster rolls are now going for around $20 each in many restaurants. It's just not right.