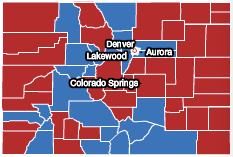 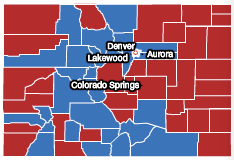 Pretty darned similar. With the exceptions of Chaffee, Mineral, Grand, and Garfield counties, which Udall won narrowly and Obama lost narrowly, the two Democrats ran pretty closely statewide. Obama ended up winning about 45,000 votes more statewide than Udall did, largely by getting a bigger vote in the more liberal counties, Denver and Boulder. This is somewhat surprising considering that a) polls had the presidential race closer than the senate race; b) Udall represents Boulder in Congress; and b) Udall is a white Coloradan while Obama is a black Chicagoan.

I'm guessing you can explain this with ballot roll-off. Obama received more votes statewide than Udall, and McCain received more votes than Schaffer. There were some voters who were just interested in the presidential race and didn't bother with the senate race. This roll-off seems to have been high in Denver, the only county in Colorado that's more than 10% African American.