I don't know why I didn't examine this until now, but the Green Papers has the record of all the state delegate votes cast at the Democratic National Convention, at least until Hillary Clinton proposed suspending the roll call and nominating Obama by acclamation. In the scatterplot below, I compare Clinton's share of the Obama + Clinton pledged delegates leading up to the convention with her share of actual floor votes cast by state. The diagonal line is the baseline for Clinton's delegate support. If a state is above the line, she got a larger percentage of the delegate vote than her share of pledged supporters in that state. 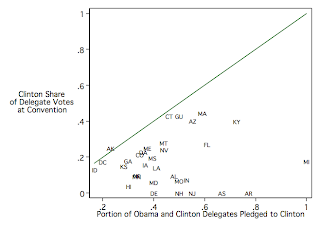 Alaska, in fact, was the only state in which Clinton got more than her expected share of supporters. Everywhere else, she lost supporters, although the degree to which her supporters defected varied substantially by state. Colorado's Clinton-pledged delegates largely stayed with her; 15 of the state's 19 Clinton-pledged delegates cast a vote for her. She lost all of her supporters in places like Arkansas, New Jersey, and American Samoa. I'm frankly curious as to why so many delegates would stick with her in places like Colorado, Connecticut, and Guam, when they'd abandon her elsewhere.

Seth,
This is indeed an interesting question. It is very much in line with a question I asked in the context of the caucus states on the Democratic side.

The caucus process has several steps to it (as you've chronicled here to some extent for Colorado) and as such offers the opportunity for delegate defection with each step. And even in states with state conventions after the Hillary withdrawal, there was minimal defection toward Obama -- some but not much. So there is some precedence for Clinton backers.

I've got more on what I've called "the caucus question" here.

Interesting, Josh! By the way, it looks like HRC held on to her delegates better in caucus states than in primary states. This was borderline statistically significant (p=.098).

Ah, interesting. And theoretically, we have some reason to believe why that occurred: Those folks had been given at least one chance (and in most caucus states more) to defect and didn't.

In primary states? It was a one and done sort of deal. Now we need to set up a duration model for the primary states. Did delegates in earlier primary states (say Feb. 5) defect more than delegates from later states (North Carolina and Indiana for example)?

That question runs counter to the hypothesized relationship in the caucus question (the more steps in a caucus, the more defections we'd see to the bandwagon candidate), but this Clinton situation is somewhat unique, I suppose. Her strength as a candidate stretched beyond the point at which she withdrew from the race.

If you switch the emphasis of the defections to Obama, though, a primaries duration model may have some merit. And that is borne out to some extent in the plot you included in the post.

Just to get back to you on this, there was slightly more defection among delegates chosen on Super Tuesday or earlier, but it's not statistically significant. If we're just talking about caucus states, there's just not a whole lot of cases here to find anything meaningful.