Voter turnout was the surprising disappointment this year. For all the talk about Obama's turnout machine, nationwide turnout was only up 1.5 points over the 2004 figures, according to Michael McDonald's estimates. Assuming those figures are close to accurate, here's how it looks at the state level, plotted against the state's vote for McCain: 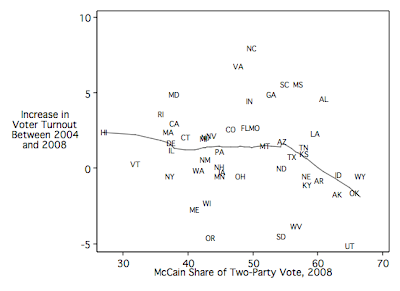 The states with the greatest turnout increases are almost all Southern states. This is consistent with some sort of race effect: high black mobilization combined with some sort of white backlash, possibly compounded by early voting (which took place in VA, NC, and GA). Also, Georgia and North Carolina had hot Senate contests.

Interestingly, the non-Southern battleground states (e.g.: CO, MO, NV, PA, MN) didn't see much of turnout increase at all. Ohio is actually down from 2004.

Also, note the ideology effect: there's a big dropoff in the turnout trend as you get above a 55% vote share for McCain. This suggests a depressed conservative base that failed to turn out.