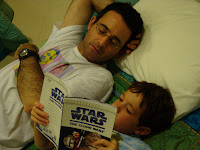 As the photo at left will attest, my son and I disagree about the entertainment value of the Star Wars: Clone Wars series. My son, of course, loves it. He's also a big fan of Phantom Menace and Attack of the Clones, and he finds Jar Jar entertaining, so I assume that there's something wrong with him.

However, I was pleased to learn that even he has his limits. I stumbled across the complete Star Wars Holiday Special on Google Video recently, and he expressed interest in watching it. Even he complained that it was horrible after just ten minutes and refused to watch the rest. So I'm proud.

But I post it here for my faithful readers and dare you to watch it. I'll bet you won't even make it to the dancing chessboard scene, no less the cameos by Bea Arthur and Harvey Korman. Still, the commercials are awesome.

It's worth watching the Rifftrax of this, with commentary from some of the old MST3K crew.

Believe it or not, I waited in breathless anticipation of this in 1978.

We were stuck over in Germany and eight year old me knew that there was this TOTALLY AWESOME Star Wars thing that never got to the base theaters. I'd read the comic books, I'd read all sorts of stuff about it, and I was pumped... it was going to be the first time I ACTUALLY SAW REAL STAR WARS STUFF.

You can imagine my underwhelmedness.

Luckily, my folks found a pirated copy of Star Wars on VHS within a few months. It was so severely pirated that it was still anamorphic, but it was enough to hook me until Episodes 1--3 gang-raped my fuzzy happy memories of watching star wars almost literally every day after school.

I remember watching the Paul Lynde Halloween Special. I even remember those jokes. May God forgive me.

I've never actually seen this, but as a Star Wars-loving kid in my own youth I always wanted to. I may have to finally see if it's true that there are entire scenes several minutes long of wookies talking to each other without subtitles or explanation.

Jeremy, I'd encourage you to spare your young mind the agony. Yes, there are very lengthy scenes done entirely in Wookie without subtitles. And yet these are not remotely the least comprehensible scenes.