I wanted to follow up on my soccer post from last week, in which I examined resistance to soccer by conservative opinion makers.  Drew Conway had a nice post showing basically no relationship between a country's freedoms and the success of its soccer team.  This inspired me to look into the relationship between wealth and soccer success.  The graph below charts out each country's per capita GDP (logged) on the horizontal axis and its FIFA ranking on the vertical axis (1 is best, 202 is worst). 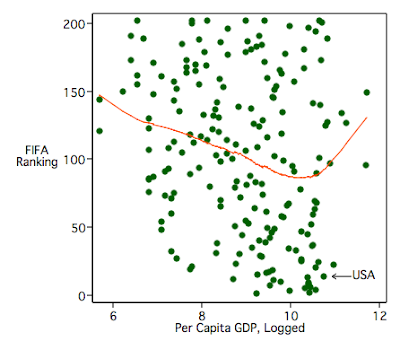 The regression is negative and statistically significant (p=.001), suggesting that for each additional $10,000 a country moves up in per capita GDP, its FIFA ranking should improve by about 4 places.  However, as you can see from the smoother line, the relationship switches directions toward the upper end of income.  It looks like there's generally a positive relationship between national wealth and soccer success, but the upper end of the distribution is being distorted by some very wealthy nations (Andorra, Bermuda, Luxembourg) with disproportionately crappy soccer teams.

So, contra Glenn Beck's rejection of soccer, conservatives should clearly love this sport, since you can buy success.  It's all about social mobility.  USA!  USA!

Comments welcome, although please keep in mind that I know very little about soccer, sports in general, or countries not called the United States of America.

Update: The inflection point in the trend above is largely caused by wealthy, relatively non-populous countries with unimpressive soccer teams.  Addition national population to the regression makes a big difference, straightening out the trend and raising the R-squared from .06 to .46.  Controlling for population increases the estimated impact of GDP.  Now it appears that a country should improve about one FIFA ranking place for every additional $1,000 in per capita GDP.  Here's a partial regression plot of GDP predicting FIFA rank, controlling for population: 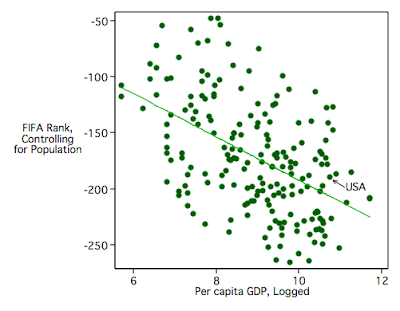 Very nice! Could you please post the code to the graph, and/or the data in compiled form? I would very much like to replicate and play a bit with it.

I suspect you'd need to somehow control for regional competition. Vietnam has the same population as Germany, and is less successful than Germany both economically and on the soccer field. But I suspect that's because Germany has to regularly beat Italy, Spain, France and England to win European competitions, where Vietnam has to beat Indonesia, Bangladesh and Thailand. The African countries have been on the upswing in the past 20 years, goes the CW, because African players started to win spots at major European clubs -- Manchester, Barcelona and so forth -- so gained experience facing the people who would be their opponents in international competition. Same with the recent US success; it seems very much down to our guys having day jobs playing in England, France and Germany. So Glenn Beck should like soccer not because you can buy success with nasty socialist player development programs, but because success seems to come from a handful of John Wayne types heading off to stake a claim in a faraway territory. Which in this case is, okay, Liverpool. Still.