The Clinton endorsement: It's all about 2008

In my last post on Bill Clinton's endorsement of Andrew Romanoff, I asked,


I'm sort of curious why Clinton got involved in this race at this point. Does he earnestly think Romanoff is more electable than Bennet and thought he could make a difference? Did either Bennet or Obama do something recently to irk Clinton? Is this a proxy war between the Obama and Clinton teams?

Alert reader David Karol writes in to say it's all too simple: Bennet was an Obama supporter in '08; Romanoff backed Hillary Clinton.  Now, as far as I know, this is the first Democratic primary since 2008 in which Obama and Bill Clinton have backed different candidates.  (Does anyone know of any primaries right now involving an Obama supporter versus a Hillary supporter?)  But, as David points out, Bill has been very active in helping out Hillary's former endorsers, including Gavin Newsom, Kirsten Gillibrand, and Libby Mitchell. 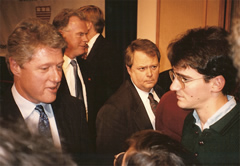 So it's not quite accurate to say that the Obamas and the Clintons are cruising the country looking for a chance to fight each other.  It's more like Bill Clinton is repaying those who stood with his wife.  Which is evidence that endorsing a candidate that loses is not necessarily a bad thing -- it can earn you the gratitude of some important people.

One thing I find interesting is that the Clinton/Obama split in the Colorado primary does not seem to be filtering down to the activist level.  I haven't conducted a thorough survey along these lines, but it looks like the 2008 Democratic delegates are not split between Bennet/Romanoff the way they were split between Obama/Clinton.  As David suggests, this shouldn't be too surprising, given that one of the main issues that divided the 2008 candidates -- Hillary's vote on the Iraq War authorization -- is not an issue in the 2010 race, nor are the demographic divisions between the candidates.