I generally support the idea of becoming an expert on something rather than generalizing on everything, even if I don't always follow this advice.  You never know when your area of specialization will become hot.  People who studied vote counting and election technology were generally considered geeks until the 2000 presidential election -- suddenly they were booked on every news show and in every courtroom in the country.

I was struck by this thought when I noticed these items for sale in the first aid section at Walgreen's recently: 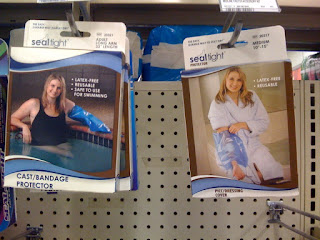 Yes, that's the same model.  She models for cast/bandage protectors and wound dressing covers.  You may never find yourself trying to sell a cast protector, but if you do, she's going to be on your call list.
Food for thought.

Leave broken arm/leg/elbow lady alone! She probably just got a one-day job posing for pictures for the SealTight corporation, and the photographer had her don and run a few shots wearing all their helpful and pain-reducing products, which was probably really fun. Though I do wonder how one gets such a job. Does her modeling agency say, "Sure, we'll send over Jane, she does 'injured but contented with her osteopathic care decisions' really well."

You think she got to keep the products? Sounds like a sweet gig.