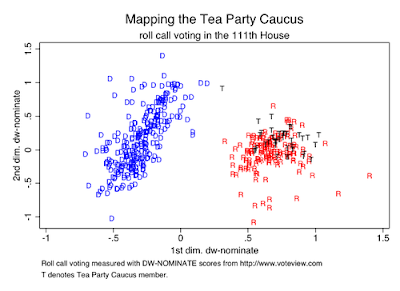 Tofias notes how different the Tea Partiers are from the GOP caucus as a whole:

To me, though, the striking thing is how similar they are to the rest of the caucus.  Yes, on average, they're somewhat more conservative than the typical GOPer, but not that much.  Indeed, the most liberal Republican in the House, Walter Jones (NC), is a Tea Partier.

Hey, speaking of mapping the TPs - I may be seeing a pattern of attorneys with a Florida past,in TP leaders featured in the press.
Anyone else notice this?
(I'm not sure enough to sign my name to it)