Earlier today, I wondered if it was possible to predict patterns in state legislative elections the same way we do for congressional and presidential elections.  Well, political scientist, heal thyself.  The NCSL has data on partisan control of state legislatures going back to 1938.  So I plugged that into my dataset on midterm elections and produced the following graph.  The horizontal axis charts the growth in real disposable income between the 3rd quarter of the year preceding the election and the 2nd quarter of the election year.  The vertical axis shows the increase in control of state legislatures by the president's party. 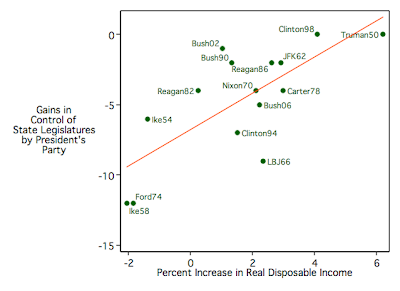 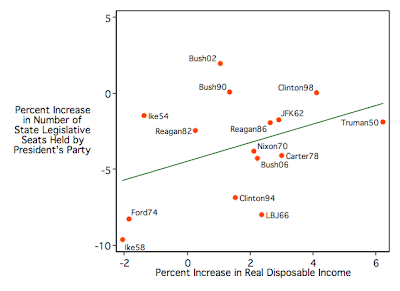 I used percentages rather than raw numbers since the total number of state legislative seats isn't constant over time (Hawaii and Alaska add theirs in starting in 1962).  The relationship between national economic growth and changing state legislative seat shares is statistically significant (p=.003), suggesting that for each percentage point drop in disposable income, the president's party will lose just shy of one percent of its share of state legislative seats.  This bivariate regression has an R-squared of .28, only about half of what it was for statehouse turnover above.

Now, in a socialist country, the government would simply provide all the data you need.

The spreadsheet goes back to 1990, but I'll bet there's other census data for earlier years.

The Klarner dataset at the SPPQ site will take you back to 1959.

With a long time frame you (the generic you, not Seth) really ought to deal with the one-party south and the nearly monotonic trend towards the Republicans since the Civil Rights Act.

Odd that state legislative control would be more responsive to the economy than the House. The chain of accountability seems far longer and more tenous. Of course, party labels are generic brand names, but still.

Thanks for the tips, folks! I tried plugging in the Klarner dataset, and interestingly, actual seat gains in state legislatures doesn't seem to correlate at all with national economic conditions. At some point when I have more time, I'll incorporate the Burnham data to get more years in there, but so far it looks unimpressive. Also, Anonymous is right about the one-party South issue. It might work better just to deal with the non-South, although that's hardly issue-free.

Update: I had a coding error using Klarner's dataset. Seat gains and state legislature flips actually track each other quite closely, and both are explained by economic trends.