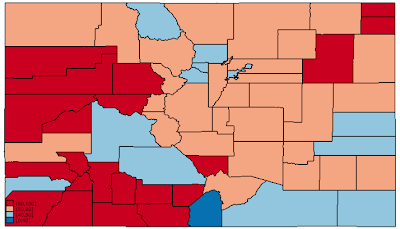 Bennet won a majority of the vote in 51 of the state's 64 counties.  He actually won by 60% or more in twenty 21 of them.  Romanoff's support was limited mainly to Denver and a few smaller north-central and south-eastern counties.  Romanoff actually lost in Pueblo County, which he had described as his second home (back when he had a first).

Looking at regression results, it looks like Bennet did better in more conservative, poorer counties.  Also, there seems to be some positive relationship between Obama's performance in the 2008 caucuses and Bennet's performance in yesterday's primary.  The relationship falls a bit short of statistical significance, but there might be something to it is statistically significant at the .01 level, controlling for demographic factors.

Update: Anonymous noticed some data entry problems.  The map and text have been updated.

Thanks for picking up on that, Anonymous. I've fixed the problems.