Departures Offer Chance for a Fresh Start as Term Ebbs

Oh, yes, the fact that Bush finally lanced a boil a good six months after everyone told him to and years after the boil did immeasurable damage to the Constitution and the office of the AG just has to be good news for the administration. And, of course, if Gonzales hadn't left, it would have been good news, too, because it would have highlighted Bush's profound sense of loyalty. And conveniently, the article's second paragraph compares Bush to Reagan. 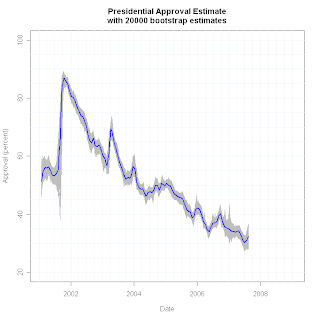 A modicum of pity for Sen. Craig 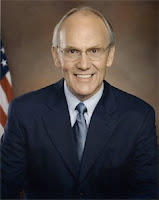 Okay, let's just stipulate that there's an overwhelming feeling of schadenfreude when a "family values" Republican officeholder is outed as gay. He's a hypocrite. He rose to power by criticizing the same behavior he apparently practices in secret. Shame on him.

That said, he could've beat this rap. So far, Matt Yglesias is the only one I've seen pointing out that the arrest report doesn't really describe much criminal behavior. It's all contextual. Tapping one's foot beneath a bathroom stall surely isn't a crime in Minnesota except in the context of requesting lewd behavior, and that requires proof of intent. I can understand that Craig probably didn't want to fight this in court, so he figured he could end it quickly with a guilty plea. Shows what he knows.

But beyond the bad legal approach and the hypocrisy, what we have here is a guy who, as part of his job, spends a lot of time in airports. And, when he's bored and alone, he happens to like the occasional anonymous gay sex. That doesn't really turn me on, but why is that a crime?

I mean, here's a conservative guy growing up in a conservative state. And in order to pursue the career he wanted (indeed, in order to stay alive, in many cases), he had to deny his true self. And as we increasingly see from the likes of Ted Haggard and others, you can only do that for so long. The itch just has to be scratched eventually.

It's sad. And surprisingly common.

If you can track it down, I encourage you to read The History of Legislative Methods in the Period Before 1825 by Ralph Harlow (Yale University Press, 1917). This is a fascinating book about the growth of legislative political parties in the colonies and early U.S. Congress.

In Party Government (1942), Schattschneider goes out of his way to criticize James Madison's Federalist 10. Madison, of course, was warning us about the dangers of faction, and was apparently oblivious to the necessity of parties in running a democracy. Schattschneider claims that Madison couldn't have known how important parties were to democracies because neither Madison nor anyone else alive at that time had ever seen a real functioning representative democracy.

Harlow shows that Schattschneider's claim is bunk. The pre-revolutionary colonial legislatures had evolved party systems (called "Juntos") to counter the power of the colonial governors, who were usually picked by the king of England. In many of the colonies, the Junto was as powerful or even more powerful than the governor.

One of my favorite examples came from Massachusetts. In 1766, the governor urged the statehouse to investigate the recent riots over the Stamp Act and find out who was responsible. The statehouse, under the control of the Boston Junto of brewer/patriot Sam Adams, John Hancock, and others, appointed five investigators from outside Boston who knew nothing of the city, of committee work, or of the riots. Thus did the legislature follow the governor's orders while producing exactly the results it wanted - none of the riot's perpetrators were brought to justice.

While I usually don't get into books on committees, Harlow's examination of the growth of committees as an arm of legislative parties is really quite interesting. If you're remotely interested in parties or early U.S. governmental history, this is a great book for you.

I'm not sure when my Tom Friedman Bubble burst. I used to really enjoy reading him. While I often disagreed with him about the need for military action against Iraq back in 2002-03, I thought he was at least making cogent arguments. And while he used to back up his claims about the Middle East by quoting the one or two people in Saudi Arabia he actually knew, that was one or two more Saudi Arabians than any other big name columnist knew, so it gave him some credibility.

Anyway, it's hard to believe I once found arguments like this persuasive:

Seen in hindsight, Friedman appears to be either clinically insane or just a child with a moustache. And now his columns all seem to be some variation of, "The war [I cheered for] is going poorly, but Bush can save it by doing the following ten politically suicidal things: 1) Pass a $4/gallon national gas tax; 2) Appoint Muqtada al-Sadr to the U.S. Supreme Court...." And then, of course, when Bush does none of these things, he says we should give Bush another six months, which is renewable ad infinitum.

So part of this is unmasking Friedman as a bit of a fraud. But it's also a reminder that he, like a lot of us in the year or so after 9/11, was a bit loopy.

A common theme among Bush's defenders these days is that liberals don't realize what a dangerous world we live in, but another terror attack would snap us all into line. Well, that's probably true, but that doesn't make it desirable. Terrified people can overlook their differences and band together, but that doesn't mean that they'll make wise decisions.

The Meat Lady who Wouldn't Leave 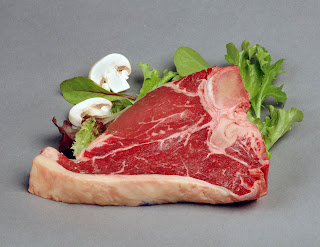 We had a visit today from a representative of Town and Country Foods. They're a meat and produce wholesaler. They produce what appears to be very high quality meat, flash-freeze it, and send it out to you at reasonable prices. And they give you a freezer full of the stuff - enough to last for six months. Then you pay by the month.

I have to say it was a good sales pitch. The representative explained the exploding costs of supermarket foods, the problems of pesticides and food borne illness, etc. By producing high quality foods and shipping it directly to customers, this company can keep prices modest and consumers can avoid some of the problems of modern food production.

But as this pitch went on - for more than an hour - my wife and I realized that, even while we liked the idea of the plan, we'd have to change our eating style substantially for this to make economic sense to us. We'd have to eat a lot more meat and get used to eating more frozen vegetables. Hey, I love beef, but to me it's an occasional treat. We just don't have it in the house that often. And we love our fresh veggies. Town and Country won't get us heirloom tomatoes or morels. So I think what would end up happening would be that we'd spend a lot of money on meat that would just sit in our freezer for years, and we wouldn't save anything off our regular food budget. Either that, or we'd start eating like red staters. Neither is optimal.

But the meat lady didn't want to leave. I don't have much experience in sales, but I get the fact that once you leave someone's house, your chance of making the sale drops precipitously. So she digs in. Keep in mind it's about 7:45 PM. The kids' bedtime is rapidly approaching and we'd promised them ice cream. The kids were really being angels this whole time, but they were starting to lose it. So the meat lady says that she can just wait for us to put them to bed and can draw us up a menu and a contract while we're doing that. We say we want to think it over. She keeps asking if we have questions. We finally had to kick her out.

Now, she did leave us with an enormous quantity of sample meat - two T-bones, 2 lbs. of chuck, some burger patties, 4 pork chops, and some chicken. It looks good. If we really end up liking it, we'll think about the massive meat freezer. But I don't think this is going to happen.

My moment of Zen