I'm not surprised this statistic hasn't gotten a lot of attention so far, even though it's probably the fairest way to compare across countries. 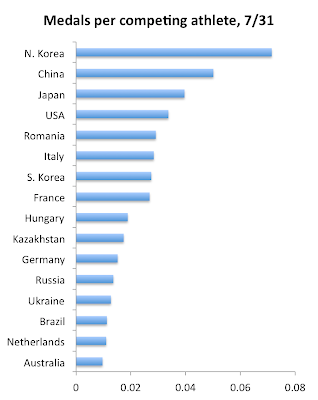 Update: I'm not sure if this is a fairer measure, but here's medals won per million citizens. North Korea is still looking pretty solid, but Hungary's stomping the world. 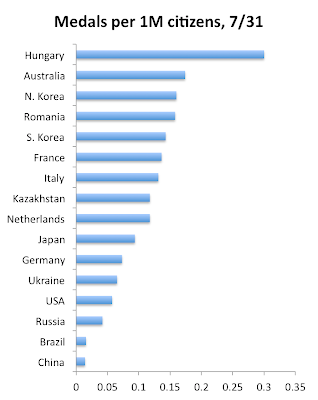 Oh, and what the hell, here's the number of medals divided by nominal GDP, as reported in the CIA World Factbook. 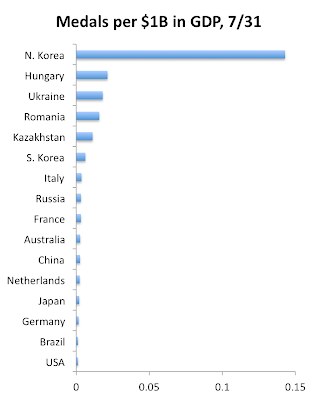 We recently came back from a visit to western South Dakota, which was fantastic and surprising in many respects. I'd never been to the state, and the image I'd conjured in my mind was really nothing like what I saw. We were surrounded by bison in Custer State Park, we saw an active mammoth dig site in Hot Springs, we were mesmerized by the Badlands, we learned a lot about the Wounded Knee massacre in a tiny museum in Wall, and more.

But what I wanted to mention was our visit to the Minuteman Missile National Historic Site. Much to their credit, the Park Service decided to maintain a Cold War-era launch control facility and silo. We toured the launch control facility -- it was free, but you need to obtain tickets in advance. The facility is basically a small base on the ground level, where roughly 10 people were stationed starting in the mid-1960s. They provided security, maintained communications, and cooked food for the two-person crew stationed thirty feet below in the launch control center.

The underground center is basically a capsule with 3-foot thick concrete walls, held to the surrounding earth by giant shock absorbers. It was built to withstand a nuclear detonation as close as a mile away. The two chairs inside it have seat belts so that the officers wouldn't be thrown around the chamber in the event of a blast.

The Park Ranger leading our tour gave us a good impression of the lives of the people stationed in this facility. They worked in 24-hour shifts but only had roughly 1-2 hours of work during that time. Beyond that, they just sat and waited for the order to kill millions of people. It's a serious head trip. Officers picked for this job were usually under the age of 25, making them more likely to follow orders and less likely to have families.

Here's me about to turn my key to start World War III: 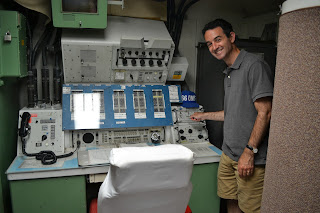 And here's some interesting gallows humor painted on the center's concrete door: 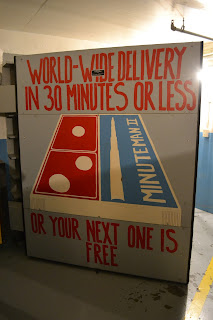 Anyway, it's a fascinating piece of history and very much worth the visit.

A reason to celebrate


(Reposted from Mischiefs of Faction)

Want a reason to celebrate this Independence Day? Try this: elections. Yes, elections can be annoying, and if you live in a swing state, you are undoubtedly already being hammered with mind-numbing attack ads, with Republicans claiming that everything that Democrats do is craven or evil and vice versa.

But what's the alternative? I've spent far too much of my leisure time in the last year listening to the History of Rome podcast and watching "Game of Thrones," and one thing those tales drive home is the challenge of succession. Many (perhaps most?) of the battles fought by soldiers of the Roman Empire were fought against other Roman soldiers, either putting town a rebellion or taking the throne from a usurper. Passing power along by bloodline can help -- at least it's some sort of system -- but it can create just as many problems when an heir proves incompetent or there are multiple legitimate claimants. One of the reasons for the successes of the Roman emperors of the 2nd century AD was that most of them did not have male children -- they were able to choose qualified successors and groom them for leadership. Marcus Aurelius, of course, did produce a male heir, and he turned out to be an insane Joaquin Phoenix, ending the empire's century of competence.

I find this important because the Roman Empire was pretty much the most advanced civilization the world had ever seen. It had sophisticated systems of currency and trade, an advanced legal system, a functional bureaucracy, not to mention its amazing military capabilities. But they were never able to resolve the problem of succession of power.

And yet this is something we take for granted today. Elections are fought fiercely, but they end. The results are rarely disputed, and basically never with violence. We do not fear for our lives if we pick the wrong presidential candidate, and we do not waste blood and treasure putting down rebellions and ousting usurpers.

No, we're not the only nation to figure this out, but it's nonetheless something to be proud of, especially since so many advanced societies before us failed on this point. So this Independence Day, let's celebrate by volunteering for a candidate, donating money to a campaign, or just watching an attack ad.