How to criticize Obama without making crap up

I tweeted the other day that the GOP convention had thus far offered an excellent critique of things Obama hasn't actually said or done. Paul Ryan seemed to double down on that strategy last night, saying numerous things that were, at best, highly misleading. Poor Jonathan Bernstein blew a fuse when Ryan criticized Obama for opposing the debt commission recommendations that Ryan himself had voted against, and then later offered this explanation. Even Fox News called Ryan's speech "deceiving" and "distracting" (if also "dazzling").

But all this seems to be part of a convention strategy of attacking an alternate reality Obama rather than the one who currently resides in the White House. A national convention is a rare opportunity to get your message out to voters unfiltered, and when you spend nearly all of it criticizing the government takeover of health care that didn't happen, the apology tour that didn't happen, the war on religion that didn't happen, etc., and then make the entire convention's theme ("We built it") a response to an out-of-context quote that only works as a gaffe when you selectively edit the president's speech, and when it seems the media is finally willing to call bullshit on this stuff, it makes you look bad. It makes it look like the real Obama must be a brilliant, flawless president -- otherwise, why would you have to make stuff up about him?

Now, even the most ardent Obama fan (even Obama himself, I'll bet) would admit to some flaws over the past 3 1/2 years. Can Republican speechwriters not come up with any? Let me just offer a few suggestions for those still working on some speeches for tonight:
I just have to think there's enough factual material out there to fill a 30-minute speech. The viewers on Fox (the primary audience for this event) might be content with the fantasy world attacks, but if you want to speak to a larger audience, a bit more might be demanded of you.

Colorado: It's not just a ski resort that burns down each summer

The University of Denver and the Glover Park consulting group conducted a press conference last Monday in Washington, DC, to discuss Colorado politics, the presidential debates, and the 2012 election. I was one of four DU faculty members in attendance, along with DSCC Executive Director Guy Cecil and former Colorado Republican Party Chair Dick Wadhams. Dee Dee Myers hosted. You can see all the action here on C-SPAN. 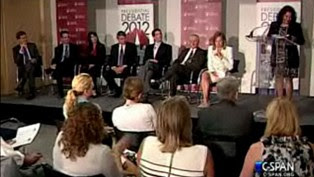 Links for following the 2012 elections


[Reposted from Mischiefs of Faction]

I recently did a talk for an Election Watchdog Workshop run by Investigative Reporters and Editors, during which I provided a list of recommended resources for following the fall campaigns. I figured I'd reproduce the list below. Please feel free to suggest any other good ones.