When states go from red to blue

One of the various theories as to why Colorado and a few other states have switched so quickly from reliable Republican presidential votes to competitive-leaning-Democratic ones is migration.  That is, liberal voters have moved there from other states.  Colorado has seen a large influx from Democratic-voting states like California, although (regrettably, for my purposes) the Census does not record party ID info.  So how can we be sure that that's what's going on?
Well, here's one way of looking at the question.  I've plotted out the growth in county population between 2003 and 2007 for each county in Colorado against the increase in the Democratic presidential vote between 2004 and 2008.  The point sizes are weighted by the population of the counties -- counties with more than 200,000 residents are labeled. This is far from a perfect correlation, of course, but it's statistically significant and in the expected direction. 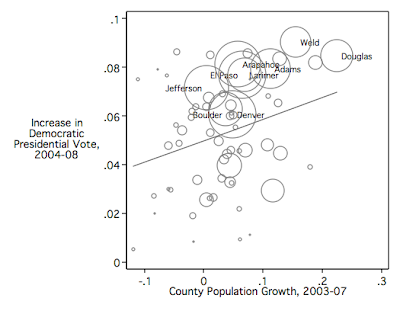 I looked at ten other swing states to see if the same relationship holds.  Interestingly, population growth only predicts the Democratic vote swing in Missouri, Ohio, Pennsylvania, and Virginia.  North Carolina and Florida are borderline.  In other states (Iowa, Indiana, New Mexico, Nevada), there appears to be no relationship.

So, yes, for some states, the reason that they've moved left is because more left-leaning people have moved there from other states.  This would suggest that Democratic gains in those states are not temporary -- they won't start voting Republican again when the economy improves or home foreclosures return to typical levels.

Question on your post regarding Palin and Jews. Do you agree with the following argument?

The argument is that if indeed she has a 35% favorable rating with Jews, that's actually pretty good for a conservative Republican considering that Republicans win only around 25% of the Jewish vote and considering that Barack Obama's favorable ratings are around 28% with white born-again evangelical Christians, a group that typically goes to the Democrats with 25% of the vote.

See the comments in my previous post for a response.

The association of fast population growth with an increase in the Democratic vote might also reflect the "age gap," with Obama carrying young voters 2-1, but losing seniors. In Florida, Obama ran very well in the fast-growing and demographically young Orlando area, while he didn't perform well at all in retirement areas on the Gulf Coast.

I agree that favorability does not always equal who you will vote for but I don't think Palin, based on your numbers, would do any worse than Bush or McCain among Jewish voters.

I agree that Rubin's argument is flawed. However, it doesn't even appear that she's unpopular with Jews when you take into consideration that it's not a swing group at all.

As for McCain, I'd agree that he's more popular with Jews than she is but then again, doesn't that just point out that the McCain/Palin ticket probably did as well as a Republican ticket could have among Jews given that their favorable among Jews aren't that bad (that is, if you accept the premise that Palin's favorable rating with Jews isn't that bad).

However, it doesn't even appear that she's unpopular with Jews when you take into consideration that it's not a swing group at all.

I don't understand what you're arguing. Palin is plenty unpopular with Jews. The point of my post was that she'd be equally unpopular with any subgroup that's 75% Democratic.