One of the curious features of the modern U.S. House of Representatives is that Democrats tend to run the chamber with large majorities, while Republicans tend to have slender majorities when they're in charge.  Check out the following chart, showing the size of the majority in the House for each congress since 1981: 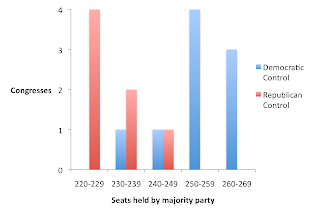 Democrats usually have majorities of between 250 and 270 seats.  The bulk of GOP-run houses during this time period, however, saw the majority party controlling between 220 and 240 seats.  The one large Republican majority in this time period comes from the incoming 112th Congress, in which Republicans will have north of 255 240 seats.  This is highly unusual for Republicans -- the last time they controlled this many seats, Herber Hoover Harry Truman was president.
Republicans often get credit for running the chamber with tighter discipline than Democrats have, but that may simply be a function of majority size; a small majority can't tolerate many defections.  We'll know more about how large Republican majorities behave soon enough.

Update: I originally grossly inflated the Republican numbers in the 112th House.  I'm not sure how I did this.  At any rate, I've edited the post and the graph accordingly.  The lesson, thankfully, is still valid.

What year was the last time they controlled this many seats?

Daniel, it was the 1929-30 session, during which they controlled 270 seats. Partisan breakdowns can be found here.

Won't Republicans control just north of 240 seats? They had a successful midterm but not "north of 255 seats"-successful.

Yes, JCordes, you're correct. How embarrassing. I've adjusted the post above.