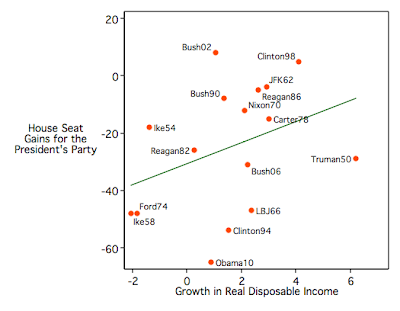 As loyal readers of this blog are no doubt aware, my forecast of the midterm election was pretty wide of the mark.  We don't know the exact number of House seats the Republicans have gained yet, but it looks to be around 65 seats.  (I've updated the scatterplot above using this figure.)  I had predicted 40 seats, with a 28-seat margin of error.  So, while 65 seats is within that margin, it's really out in the tails.  And as the scatterplot above shows, it's a huge outlier.  I am gratified somewhat that most other forecasters missed it by a lot, too, but the question remains: why did we miss this?
John Sides offers a bit of speculation.  One thing he touches on is the importance of candidate recruitment -- the favorable political conditions for Republicans made it easier to recruit high-quality candidates this year.  Contrast this with 1994.  Yes, Republicans recruited heavily that year, as it was clear that conditions were running against the Democrats, but few believed that the GOP would really take the House that year until right before it happened.  Democrats had held the House for forty years; a Democratic House was believed to a permanent part of the political environment.  Today, we know that the House can flip back and forth.  It was clear by mid-2009 that the economy wouldn't be expanding robustly any time soon, that unemployment was going to remain high, and that Obama's popularity wasn't likely to surge.  Add to that the knowledge that a decent set of GOP candidates could actually flip the House, plus a nascent Tea Party movement that was producing potential candidates, and you have a great recruiting environment.
I'm not saying that's the only reason the GOP won so many seats, but it might contribute to it.  I'm still wondering about other reasons.  I can't help noticing, for example, that the four biggest outliers in the above scatterplot are from the last five midterm elections.  Perhaps large swings are a feature of stronger partisanship, or nationalized elections, or something else.  But the swings are getting larger.
Meanwhile, a spot of good news for my forecasts: I predicted that Republicans would take over 16 legislative chambers.  It looks like they've taken 18, although there are still a few that are up in the air (including the Colorado House).

I agree with your point about candidate recruitment. In 1994, no Republicans knew what it was like to serve in a House they controlled (and life in the O'Neill-Wright-Foley House was pretty awful for them).

Even in 2006, it had been a dozen years since Democrats had been in power, and it was difficult to convince potential candidates that it was worth the risk. But this time, it had only been four years since the GOP last controlled the House, so every Republican knew what it would be like to be in the majority.

But isn't exposure the factor you're missing? Democrats gained 50+ seats in the House in '06 & '08, and held almost 50 seats which had voted for McCain. Republicans could run up the score just by winning essentially conservative districts, many of which they had held before. Indeed, the GOP won about 80% of McCain-Democrat seats, and took back the vast majority of '06-'08 pick-ups. By contrast, they captured relatively few districts where Obama got over 55% - maybe about ten, when all is said and done. The nationalization of House races seemed pretty relentless.

Does this graph look any different when % of the national vote is the dependent variable? The GOP vote seemed distributed in a way that allowed them to over-perform their national share this year.

Richard, you're right that exposure is a big part of it. Brendan Nyhan has a post today showing that as a percentage of their seat share, yesterday's losses by the Dems weren't unprecedented, but they were still at the high end. It looks as high as 1974. So we can still ask, why did the Dems lose as much of their share of seats as the GOP did right after Watergate?

I'm highly skeptical of candidate recruitment. This was the year of Maes and O'Donnell and Rand Paul and Sharron Angle. The candidates were horrible. The wins were despite and not because of good recruitment.

It was also the year of Kelly Ayotte and Rob Portman and Marco Rubio and Scott Walker. Textbook "good candidates."