War of the Gods 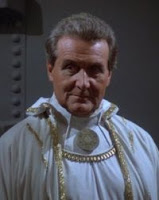 I've been going through all of the original "Battlestar Galactica" series with the kids.  It's been a long time since I've viewed most of these episodes.  A lot of them are quite forgettable, to be honest.  But the two-parter "War of the Gods" was interesting, as it apparently provided a lot of major plot lines for the re-imagined series from recent years.

Now, the episode is really quite silly.  Count Iblis (Patrick MacNee) mostly walks around issuing bizarre, transparently evil statements like "My knowledge of the universe is infinite!" and "Do not be beguiled!", usually in response to innocuous questions like, "Would you like extra ketchup packets?"  He's clearly trying to chew up some scenery, but it's hard to do that with the stupid dialogue he's given.  But fans of the recent series will note some important developments:


There's more, and it's really worth watching just to see how the recent show's writers mined this episode for material.  Also, there's some cool rope-dancing on the Rising Star that's not to be believed.