It's not just the economy

Are the swings in midterm elections getting bigger? Look at Brendan Nyhan's graph below. 1994 had the biggest loss for the president's party in half a century.  That was followed by two midterms in which the president's party actually gained seats -- also unheard of in the previous half century.  Then in 2010, we saw a larger loss for the president's party than we even saw in 1994.  As I mentioned previously, these extremes are not well explained by the economy.  The four biggest outliers in midterm elections relative to economic growth occurred in just the last five midterms cycles. 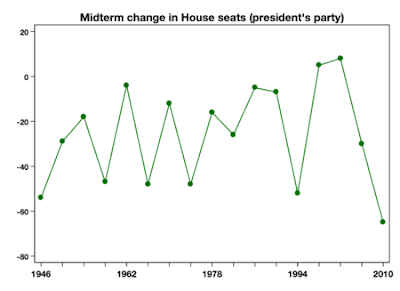 If the swings are getting bigger, what might account for this? I don't really have the hardcore evidence to prove this, but it strikes me that it's not a coincidence that the swings are growing at a time when parties are becoming increasingly strong and unified.
Greg Koger, Matt Lebo, and Jamie Carson put out an article earlier this year showing that members of Congress get punished for voting too much with their parties. This is consistent my finding with Steve Greene that the health care vote cost supporters roughly 5 percentage points in the election and with Eric McGhee's finding that the stimulus vote and the cap-and-trade vote also took a few percentage points off the vote shares of their supporters.
Why do members get punished for voting with their parties?  Because parties are not interested in pushing through popular legislation.  Parties have longstanding priorities (health care reform, tax reductions for the wealthy, etc.) that are molded and favored by the most active and passionate leaders within the parties.  These goals are priorities for the parties over many decades and do not wax or wane with public sentiment.  Indeed, in most cases, these priorities will run against public opinion.  After all, if everyone favored something, it would probably already be law -- it wouldn't take a whole lot of energy by a unified party to press for it.
So, yes, the Democrats did suffer this year because of the poor economy.  But they also suffered because they actually used their majority to do something.  No doubt a number of Democratic members of Congress -- particularly those who lost last week -- did not appreciate the pressure put on them to cast party-line votes on things like health care and the stimulus and would rather still be employed and still be in the majority.  On the other hand, if most Democrats were offered the chance to still have the majority in exchange for not having any of their legislative accomplishments over the past two years, what would they choose?

I agree, the point of winning a majority is to pass legislation favoured by the party in the majority. What is the point of being in power if they don't use it.