Anatomy of a rally effect

Why did President Obama's approval rating rise in the wake of Osama bin Laden's death? Many political scientists will tell you it's because elite discourse suddenly became very favorable to Obama. Those who usually hear neutral or critical media messages about Obama suddenly heard more positive messages, and their evaluations responded accordingly.

There's some nice evidence from MeaningMine that's consistent with this story. MeaningMine is a software program that analyzes coverage in newspapers and social media. For this project, it examined over 690,000 articles and postings and determined whether the coverage was "healthy" (supportive of Obama) or "unhealthy" (critical of Obama). The trend matches Obama's Gallup approval rating nicely: 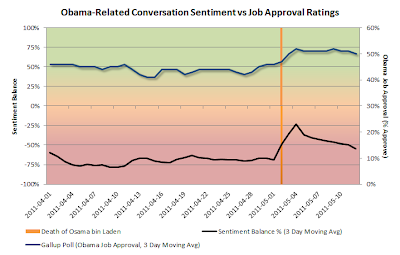 Of course, these trends moved simultaneously, so this is hardly proof of causality, but it's certainly consistent with the elite-driven theory. I'd be curious to see how the results break down by media type (MSM, blogs, Facebook, etc.).