The Denver Post's map of the early May Denver mayoral election showing which of the top three candidates received the plurality in each precinct. The candidates were Hancock (who is African American), Mejia (who is Latino), and Romer (who is white): 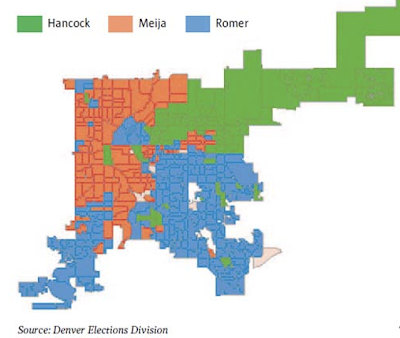 And now, the Census Bureau's map of the distribution of racial and ethnic groups in Denver, courtesy of the New York Times:

Knowing nothing about these three men's histories, a question: do candidates move votes within their own ethnic community primarily because voters are sympathetic to candidates with whom they share an ethnic background? Or is it because politicians often begin their careers in local office, and America is segregated. So they usually have longstanding organizational structures in the communities where they started, which tend to be ethnically homogenous?

It's a complicated story, based on a lot of the variables you're describing. Most American cities, Denver included, have racial/ethnic power bases -- geography and segregation are only a part of this. If your a young African American Democrat interested in politics, you're going to try to work for one of just a few "godfathers" (I'm using the term very loosely here), probably former mayor Wellington Webb. Democratic Latinos have a structure and leaders, as well. If things go well, some of those power players will back you when you run for office, and voters will respond to those endorsements. It's not really "I'm black, he's black, I'll vote for him" so much as "These black leaders, whom I've come to trust, tell me that this person will be dependable on the issues I care about."

Now, there's probably also some straight up racial voting, where you just vote your own race. (Whites have been doing this for years!) My guess is this would be more prevalent in the absence of other reliable cues, like party. So a low-information, nonpartisan election like this one, particularly with ten candidates, might be a good environment for this sort of voting.