Via Henry Farrell and Archon Fung, here's a notable quote from the late great Lee Sigelman:


If "speaking truth to power" and contributing directly to public dialogue about the merits and demerits of various courses of action were still numbered among the functions of the [political science] profession, one would not have known it from leafing through its leading journal.

I touched on this a bit in my article in the Forum last year. We actually have some evidence of of under-engagement by political scientists, provided by a 1969 survey of academics performed by Everett Ladd, Seymour Lipset, and Martin Trow. Here are responses among academics to the question of whether they have ever been active in a student group or club: 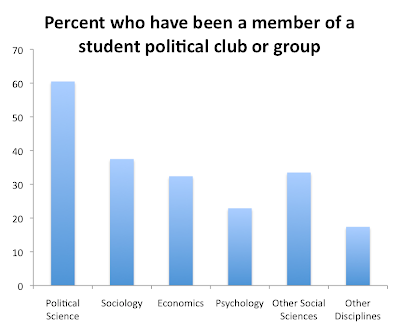 This, to me, suggests that the people who become political scientists are disproportionately inclined to join groups and get involved in politics. This shouldn't be terribly surprising -- political scientists took to their line of work because they actually care about politics. That they would have been involved politically in the past doesn't seem like a real stretch.
But note the next chart, for which academics were asked whether they are currently involved in consulting local businesses or governments, nonprofits, or national businesses or governments: 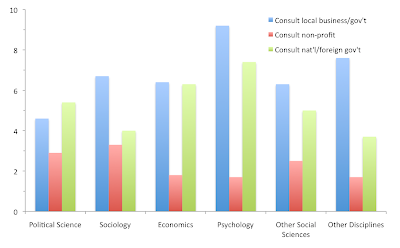