Nate Silver examined the turnout at various Occupy Wall Street rallies during this past Saturday. He notes a couple of reasons why more people might turn out in one city than in another, including racial politics, organizational technology, and city political structures. Here's another idea: temperature. Does cold weather keep people indoors?

To answer this question, I used Silver's rally turnout estimates (Excel file) for the 36 largest rallies and divided them by each city's 2010 population to get a per capita estimate. Then I collected high temperature data for each city on that date. Here's the result: 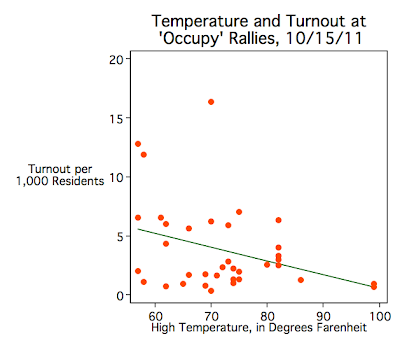 Quite the opposite from expected: the protesters like cold weather! Of course, the coldest weather for any of these cities that day was in the 50s -- this graph might look quite different if the protests were held a month from now. (In general, I'd advise starting massive outdoor social movements in the spring rather than the fall.)

Also, there's a big heteroskedasticity problem in the data, and there just aren't many cases above 85 degrees. But dammit, I collected that data, and I was going to put the scatterplot up no matter what it said.

Did you find the same results if you used temperature lows instead of highs?

I used 2010 census numbers for city populations. That's not perfect, of course -- metropolitan areas might be more appropriate. I'm not sure how to go about measuring just downtown populations; often not a lot of people live downtown.

Good idea about the low temperatures, but I haven't investigated that myself.