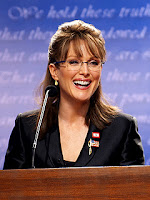 I finally saw HBO's "Game Change" last week. I'd have to say that it was a very nice (if obviously very selective) adaptation of the book, which I also rather enjoyed. The performances are very good and the casting was inspired. As with the book, if you were paying attention to politics in 2008, there's not a huge amount of new information here, but what is new is quite fascinating.

The Palin we see in "Game Change" is at different times sympathetic, pitiful, and horrifying. We see her thrown into a high stakes game for which she was terribly unprepared. We could fault her for that, but how many of us would refuse the offer she was given? Imagine being told, "There's an American hero running for president, and we think you could help him win, and if you don't, a terrible person will end up getting elected." Even without all the fame and fortune being implicitly offered, that's still a tough thing to walk away from. But then we see her come very close to (or perhaps even have) a mental break. The film is somewhat voyeuristic in this way. No, politics ain't beanbag, but it's uncomfortable seeing it destroy a person. The campaign and Palin's family seem to help her through the rough spots, but to the point of overcompensation; by the film's end, she's an overconfident monster who believes that the rules and history do not apply to her.

Although we don't know exactly who provided the background information for the book and film, it seems highly informed by consultants with a strong loyalty to John McCain. While Julianne Moore's Palin is a reckless diva, Ed Harris' McCain is a potty-mouthed saint. He grows uncomfortable with the "dark side" of populism and often steers the campaign away from less savory tactics. He wants to win, but to do so responsibly.

And that's where the film became troubling for me. It goes out of its way to depict McCain as a principled man who would rather lose with dignity than win ugly, but if that's the case, how did he end up picking Palin? For a septuagenarian with a history of cancer to pick a grotesquely underqualified vice presidential candidate is manifestly irresponsible, and he did it for the sole reason of increasing his chances of victory. Arguably, that's a lot worse than running a race-baiting ad for a few days.

Yet, in 2008, she was hardly more unqualified than Barack Obama, far and away the least qualified of the Democratic candidates who competed. A man known for a mediocre Senate career short on leadership and long on just "being there", including shying away from controversy by voting "present" too many times.

I won't watch it. The main reason is actually my disdain for Ed Harris, ever since his shameful and disgraceful behavior when Elia Kazan received his Oscar. I can't stand the sight of him any more.

I wasn't speaking in terms of years of experience in office. I was speaking of intellect and temperament. Barack Obama can speak coherently at length about a great many important political subjects. Sarah Palin simply cannot.

One could legitimately question Obama's depth of political experience in 2008, but he was not picked for that office by a handful of men in a panicky afternoon meeting. He was running for office for a year before the primaries began. Activists, party leaders, consultants, journalists, and voters had immense exposure to his past, his stances, his behavior, his beliefs, etc. He was in all ways vetted. People had an adequate opportunity to determine whether he was experienced enough for the job and they ultimately determined that he was.

Palin, according to the accounts I've read, was picked simply because McCain wanted a woman on the ticket with him. The vetting was rushed. Her nomination was forced upon the party and upon the electorate.

As for the first paragraph, it all depends on what one's political bias is. And whether or not the teleprompter is there. Is saying that there are 58 states really coherent? Obama's been pretty bad when he has not been reading from a speech someone else has written for him. Another case in point was his unscripted appearance on the David Letterman show. Freed from the teleprompter and speechwriters, Obama "being himself" chose to let fly a vicious joke that bashed Special Olympics athletes.

Good points on the rest of it.