More on race in modern politics

I just wanted to follow up on the previous post, which received some interesting comments. According to Marc Hetherington and Jonathan Weiler (via John Sides), opposition to health care reform is strongly correlated with racial resentment. The more you dislike African Americans, the more you oppose health reform. Notably, this correlation was not present during Clinton's push for health reform in the 1990s. The authors take this as evidence that racism is driving opposition to Obama's plans.
Now, as discussed in the comments, this simple correlation is somewhat misleading. It ignores the fact that the parties have been polarizing along racial lines in recent years, something I mentioned in my previous post. (Although, to be fair, Hetherington claims that they still found this result after controlling for party ID.) Take a look at the following graphs. The first is from the National Election Studies question that asks people's opinions on the following statement: "Generations of slavery and discrimination have created conditions that make it difficult for blacks to work their way out of the lower class." The chart below graphs the percent of white respondents disagreeing with this statement, by party: 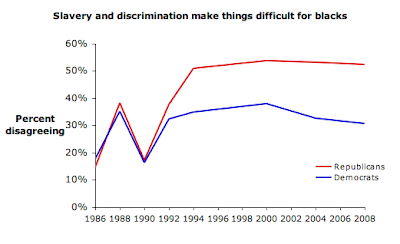 Note that the parties polarized in the mid-90s on this question. Prior to that, there was no real difference among white Democrats and white Republicans. The same trend can be seen in responses to the statement, "Irish, Italians, Jewish and many other minorities overcame prejudice and worked their way up. Blacks should to the same without any special favors." Below is the percent of whites agreeing: 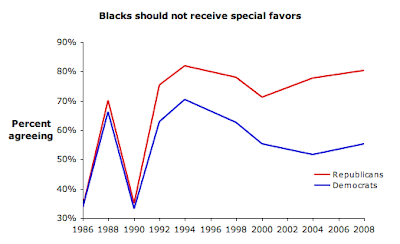 The conclusion, again, is that the question "Is opposition to Obama based on race?" does not have a simple answer. Racial resentment definitely exists in America today, but it's more polarized along party lines than it has been in a long time. Many people who do not like blacks oppose Obama, but they would likely oppose him even if he were white since they're Republicans.
Late update: Apparently I was paraphrasing Bill Clinton without knowing it:

While it is true that some of the most extreme opponents of President Obama may also still have racial prejudice, I believe that 100% of those who are opposing him now would be against him if he were a white Democrat.

Later update: Charts fixed. I noticed a coding error and extended the analysis to 2008.

Actually, I'd like to see these charts extended back so we could see if the non-polarization prior to 1993 was a permanent feature, or, say, an unusual feature typical of Reagan/Bush I. I expect it is, but it's always nice to historicize these changes.

Also, it occurs to me that the polarization charted here would probably show up with many issues, and not just race—suggesting again that opposition to health care reform may not be driven by right-wing racism as much as it driven by the rise of hate radio, FOX news, and right-wing populism. Which is pretty much what you say.

No, Republicans were more likely to disagree with that statement.