All that campaigning? It mattered

(I've mentioned some of this research previously, but it just got published, so I wanted to sum up some of what I found.)

Political scientists have a surprisingly difficult time demonstrating that campaigns actually affect the way people vote.  That seems counter-intuitive -- the 2008 campaigns spent literally billions of dollars trying to convince voters of the merits of their candidates or of the dangers of electing their opponents.  How could this not have some effect?  But the evidence remains elusive.  Campaign spending, candidate speeches, advertisements, etc., often seem to have at most a small and fleeting influence on voters' evaluations of the candidates.

One reason campaign effects are so hard to detect, of course, is that anything that one campaign does is often countered by a well-matched opposing campaign.  But 2008 wasn't quite like that.  At times, the presidential campaign seemed like asymmetric warfare, with Obama spending and organizing circles around McCain.  So I thought it might be possible to detect some campaign effects in this environment.

One area in which Obama outran McCain was in the establishment of local field offices.  In eleven battleground states I examined, Obama had established field offices in 43 percent of the counties; McCain did so in only 18 percent.  Back during the primaries and caucuses, the Clinton campaign had mocked Obama for being so aggressive in creating field offices.  As Clinton's Colorado campaign manager remarked, "Clearly, they've taken the Starbucks approach to the campaign. Pretty soon, they'll have one on every corner."  Was this just wasted money, or did it matter? 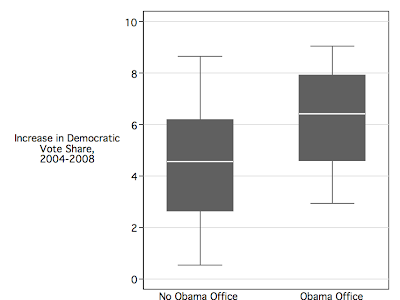 This effect, as it turns out, varies substantially across states.  In some, it isn't really distinguishable from zero.  However, the effect is statistically significant and substantively large in a few key states, notably Florida, Indiana, and North Carolina.  In fact, the effect in those states is larger than the ultimate vote difference between the two candidates.  In other words, had it not been for Obama's field offices, McCain would have won those states, worth a total of 53 electoral votes.

Now, Obama won by more than that, so the field office effect doesn't seem to have been pivotal for the entire election.  But many presidential elections (notably 2000 and 2004) are won by far fewer electoral votes.  It's not hard to imagine a scenario in which these field offices are determinative.

So, for those of you who volunteered insane hours during the campaign and wondered if what you were doing actually made a difference, it did.