Are independents a lost cause, or just slow?

Nate Silver produces an interesting chart showing approval ratings of congressional Democrats over the past few months, broken down by party affiliation and marking events related to health care reform: 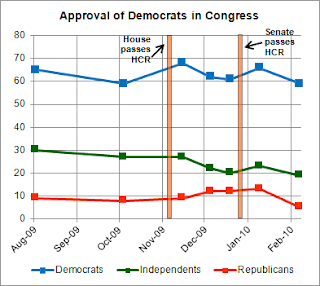 He notes that when a chamber passes HCR, it seems to produce a boost for Democrats among the base, while independents don't seem to react at all.  This leads him to argue that Dems might as well pass the thing -- it'll help the base, and independents won't care.
This is probably true, although note the pattern among independents.  They don't seem to move in the time period right after chamber passages, but they move downward in the time period right after that.  So it's possible that independents aren't reacting to these events, but it's also possible that independents are reacting, just more slowly than the partisans.  This is consistent with a lot of what we know about independents from Zaller and others -- they don't follow political events as closely as partisans, their interpretation of events is mediated by others, etc.

Silver is probably right that approval of congressional Dems by independents can't get much lower, although we should also keep in mind that most people always hate Congress anyway.