So California is going to try the Louisiana-style primary.  I can't say I'm thrilled that Californians voted for Prop. 14.  For one thing, it means that this blog doesn't have nearly the political impact I thought it did.  For another, I just don't think it's a particularly good law.  As I've mentioned before, the research on this subject suggests that this won't do a whole lot to reduce partisanship in California's legislature, and even if it did, weak partisanship isn't necessarily something to aspire to.  Beyond that, this new law will reduce the number of minority party candidates appearing on the general election ballot.  If you like to vote Peace & Freedom or Libertarian or Green, or if you're a San Francisco Republican or an Orange County Democrat, you're not going to find many candidates from your party on the general election ballot anymore. 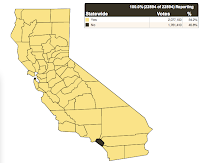 It's not terribly surprising that this initiative won, of course, as it was prominently opposed by leaders of both major parties in the state at a time when they're historically unpopular.  I imagine the calculation many voters made was, The parties hate 14, I hate the parties, ergo I like 14.  Indeed, it's fitting that the initiative passed in every county save two -- Orange County and San Francisco, probably the two most openly partisan counties in the state and the hearts of the state's Republican and Democratic establishments, respectively.
All this said, I'm actually curious what will happen, assuming the lawsuits against Prop. 14 fall flat.  We actually don't have very many cases of states trying this sort of primary system.  Maybe it will measurably reduce legislative partisanship.  And while California's own history shows weak partisanship to be dangerous, the state currently has partisanship to spare.  Of course, partisanship is far from the state's major problem right now, but at least from a research perspective, I'll be watching to see what we can learn.

Thanks for channeling my irate, unsophisticated reasoning on Prop 14!

This is a very inelegant solution, and probably not even a solution. Yet something HAS to be done. Partisanship has stifled honest debate (especially about budgeting priorities) in the California legislature, threatening literally to bring the state government to a standstill.

Some type of remedy has to be made, because lord knows the electeds will not do anything on their own.

Like you, I'm interested to see this play out. Parties already play kingmaker so likely it won't be the doom and gloom that party leaders against 14 thought it would be. Instead, they'll just control the process through party machinery and anoint their chosen candidate to face off against the other party's anointed candidate just like they do today. Minor parties get squeezed but hey, they do now already.

So not much is likely to change in major ways, but parties will really have to be on their toes, which is not a bad thing.