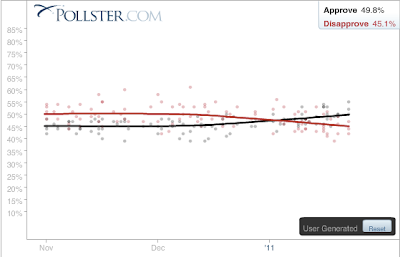 Yes, polls are showing a rise in Obama's approval rating of late -- a CNN poll has him as high as 55%, although the average is around 50 right now.  So why is this happening?  The Hill has an interesting spin:


The rebound comes as Obama has made a point of pivoting toward the center, and making more overtures toward Republicans in Congress.

Note how they never specifically say that Obama's pivot is causing the rise in approval ratings. Clever. Although they clearly imply it. Colorado Pols has another take:


We'd say this thaw in Obama's approval numbers has as much to do with hyperbole fatigue as anything else--after two years, Americans are finally realizing that Obama isn't actually Hitler, Stalin, Castro, and Osama all rolled into one. Tom Tancredo's Nazis-and-nuclear-war comparison is a perfect example of what we mean--the stuff just gets ridiculous after awhile, and people stop listening to you.

Okay, a few quick points. Obama making overtures toward Republicans is not likely to affect a whole lot of voters. After all, he made plenty of overtures to them during the health care debate, and that didn't do much for his approval ratings. Also, I really doubt "hyperbole fatigue" is having any effect here. I feel safe in saying that anyone who was calling Obama a socialist or Hitler a year ago is still disapproving of his performance today.

The most likely explanation for Obama's rise in recent polls is that the economy is actually improving. There is also quite possibly a post-Tucson shooting rally effect going on, although much of the movement seems to predate that. We'll know more in the weeks and months to come as we see whether this is a temporary bump or a sustained resurgence.

Forgive a question from outside poli-sci, but has anyone looked at the degree to which a presidential approval poll really does measure opinions about the President, rather than just being a kind of proxy national happiness index? When a pollster asks "Do you approve of the President?" do people often hear, and respond to, something more like, "howyadoin man, how's work, how are the kids?"

It's a tricky question, Marc. There just aren't many people who, when asked how the president is doing his job, will sit down and say, "Well, what are the various roles of the president? Let's examine them one by one to see whether he's doing better or worse than his predecessors." Most people use it as a proxy for other things, albeit things that are actually important.

For example, we know presidential approval closely tracks the economy. Major scandals (e.g.: Iran/Contra) also seem to have an impact, although Clinton's approval ratings actually went up during the Lewinsky scandal. Wars and crises (Cuban Missile Crisis, 9/11) matter, too.

After that, I'm not sure there's all that much to explain. I don't think there are many objective ways to say Bush was doing a better job as president on 9/12/01 than he was doing on 9/10/01, yet roughly half the country changed their minds about his job performance during that span. Sure, part of that was that they were evaluating a different part of his presidency (responding to a major crisis versus typical day-to-day presidential stuff), but most of it was that they believed they were supposed to support the president when the shit goes down.

It's basically a journalistic question. I'm wondering why we treat that approval number as so important. I see why a President's staff does. But if I'm the editor of a political desk, and some reporter tells me "the President's numbers are up!" I'm thinking, "please find me the number behind the President's, and write about that instead." Anyway thanks.

Well, we treat it as important because, regardless of what goes into it, it seems to translate into some sort of political power. I don't know the literature on this very well, but I believe presidents (and governors) with higher approval ratings tend to see more of their legislative priorities pass and more of their nominations confirmed. Approval ratings are also a reasonable indicator of their likelihood of reelection. So, unlike most polling stories, I think focusing on approval ratings is actually important and useful, but their precise meaning can certainly be misinterpreted.