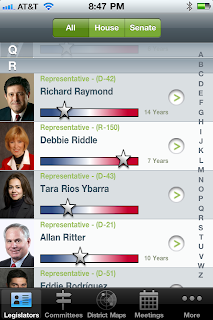 Greg Combs, a recent PhD from UT Dallas (and fellow Sleestak fan), has assembled one of the coolest political iPhone apps I've ever seen.  It's called TexLege.  Basically, it's just a really sophisticated directory of the Texas state legislature.  It's far better than any app I've seen for the national government, and I don't know if any other serious apps exist for state legislatures.

The upper screenshot at left shows the main alphabetical listing of legislators.  Note how each line shows you the name, the photo, the party, the district, and the number of years of service.  Plus, you see that red-blue bar with the star?  That's an estimated ideal point derived from legislative roll call votes.  How cool is that?  That's a lot of of information displayed in a very economical way. 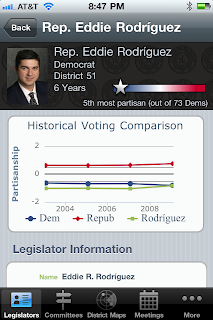 The lower screenshot shows the entry for one particular member.  Here we get to see a comparison of the member's ideal point with those of the two major parties over time.  Scroll down further and you can see which committees he serves on, contact information, an interactive district map, the Votesmart profile, and other things.

The version of TexLege up on the App Store right now is a bit outdated -- Greg has been letting me demo the new version.  Unfortunately, I believe he plans to ask $10 for the new one.  Still, I'd imagine that a number of lobbyists would be okay paying for that -- this could be a very valuable resource for them.

I wonder if Greg would be willing to partner up with some other state legislatures or the NCSL to export this technology beyond Texas.

Partnering up with NCSL or other legislatures? Definitely interested. With a little bit of tweaking, the code is extremely modular. The only obstacle really is collecting all the data for a new bank of legislators. It took an incredibly long time to do that by hand for Texas a couple of years ago, but now we've got places like Votesmart, Follow the Money, and Transparency Data open up their databases to programmers and web developers. Trouble with these lately has been that they each tend to use non-transferable legislator IDs ... They each have great data to offer, but aggregating it is prone to errors, due to often too crude name searching mechanisms. There's a Fifty States Project that looks really promising, lots of individuals scraping data from every state's legislatures website. A huge task, but that could prove extremely useful when it solidifies.

In any event, I have to believe it's easier to get roll call votes from other state legislatures than it has been in Texas. There's a reason why Mark Jones has had to spend tens of thousands of dollars to build up his sizable dataset of votes here. I can go back only as far as the legislature has PDF or HTML documents of the journals ... that's about 11 years for the Senate and about 20 for the House.

Last comment, as for the $10 asking price for TexLege 2.0, it's pretty high, given the marketplace (and the economy), but I look at it like this ... no one's really buying such esoteric apps at $2.99 either, so why engage in this whole "race to the bottom" product marketing at all? If someone buys an app for 99 cents, it doesn't really matter how great it is, because they're going to view it as a 99 cent app. You play with it a little bit and then you forget about it. Given the near regrettable amount of time I've spent on this version over the past half year or so, (thanks in large part to the utter lack of tenure-track opportunities around the state), I figure I can charge what I think it's worth, rather than what I think will sell. Honestly, I still don't think it'll bring in enough to offset the $99/year iOS developer licensing fee. TexLege 1.0 has been available on the App Store for over a year now and I still haven't hit the account balance threshold where Apple can actually send me a check. So, it's not going to pay the bills for sure, but it's a work of love and that's almost rewarding enough ... if not, it's certainly reeeeally unhealthy.