Why so few Revolutionary War films? 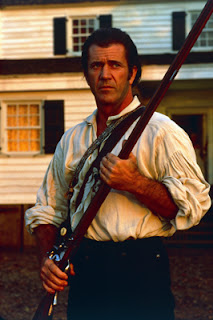 Alyssa Rosenberg and Erik Loomis want to know why there are so few films about the Revolutionary War. It's a good question. It may well be that when you get into the weeds, it's just hard for modern audience to relate to the story. Independence is a great rallying cry, but why would most individual colonists favor the cause, risking their lives in the process? Because of a friggin' tea tax? Drink coffee, dude. (I'm oversimplifying, I grant you.) And the details of the war, for the most part, just aren't that compelling. It was mostly a case of the Americans very cleverly retreating until the French bailed them out -- not really how Americans want to see themselves.

Then again, it's the movies. They can always embellish! Take the film "U-571," a pretty entertaining film about the Americans who took over a U-Boat during WWII and stole the Germans' Enigma code machine. Oh, it was the Brits who did that? Well, let them make a movie about it with Colin Firth and Emma Thompson. Meanwhile, USA! USA! You see my point. One needn't be a slave to history to make an entertaining historical film.

The problem with this argument is that that's exactly what Roland Emmerich did with "The Patriot." Say what you want about Emmerich's and Mel Gibson's films, but they're usually not boring. "The Patriot" kind of was. And they took real liberties to make it compelling. They gave Gibson's character a good background and a bunch of solid reasons to join the rebel cause. They made the Brits unusually evil -- Col. Tavington was a combination of Hitler, Palpatine, and Hannibal Lecter. He locked women and children in a church and burned it to the ground. If anyone actually committed any sort of act during the prosecution of the Revolutionary War, please let me know, but this struck me as a real stretch. Nonetheless, kind of a dull film.

Why? I think it really comes down to the military technology of the time. Stephen Colbert nicely demonstrated the challenges of the front-loading musket in his reenactment of Paul Revere's ride. Shooting, followed by 30 seconds of reloading, followed by shooting, is just a poor visual. Emmerich tried to make it cooler by doing it in slow motion, but that just made it take longer between shots. Daniel Day Lewis nicely overcame these limitations in "Last of the Mohicans" by grabbing lots of rifles. He shot a dude, grabbed the dude's loaded rifle, shot the next dude with it, and so on. But that approach doesn't work as well on a Revolutionary War battlefield. Sure, you could show lots of bayonetting, but that's actually pretty gross.

If people want to keep trying to make a decent Revolutionary War film, I'm happy to go see it, but I tend to think it won't be that watchable until some daring director throws machine guns or laser beams in there.

I agree, it has to be the muskets. They also, sadly, have kept EA from releasing a "Call of Duty: American Revolution"

EA doesn't make Call of Duty games (they make Medal of Honor and Battlefield FPSs), Activision does...I know, a trivial point. I agree with some of the OP's points. I know of only; The Patriot, Revolution, and April Morning as films about the American Revolution in the last 30 years (or at all!)...to think that with the incredibly confident American sentiment and the zeitgeist around the time of WWII and 2 or 3 decades following (until getting asses handed to us courtesy of the sacrifice of a few million Vietnamese), a period rife with Western movies that few if any films depicted the American Revolution would be made (by John Wayne, for example...ASSHOLE, BTW) if left to the natural course of things, is unbelievable (literally). I think the only explanation is that the powers that be do not want to American People thinking in such terms (i.e. "The Fourth of July" rather than the proper term: "Independence Day"!)...in all likelihood it is because the british crown quietly 'recaptured' the 'colonies' at some point between the War of 1812, Civil War, Assassination of Lincoln, Federal Reserve Act, WWI, U.S. Bankruptcy under Roosevelt, etc. and you don't allow a (re)conquered People to make a lot of art celebrating their initial conquering of you (lest they start gettin' ideas)...image the U.S. occupiers allow Iraqi film makers to do movies about any faction in Iraq successfully overthrowing the ongoing U.S. (illegal) occupation of that State (or Iraq War 3, if you like)...

Here's to a new and real American Revolution against the enemy inside our lines.

Long live the Bill of Rights!!!