Time out of power and ideological extremism

John Sides has the keys to 538 and has posted a nice piece suggesting that Republicans are more likely than not to nominate an ideological extremist for president. This analysis draws heavily on Cohen et al's The Party Decides and includes one of my favorite all time scatterplots: 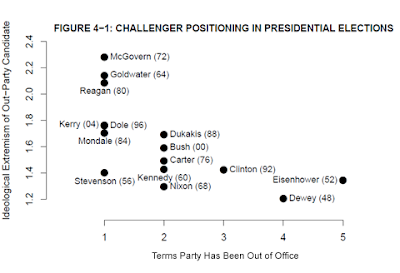 The basic lesson above is that the longer a party has not controlled the White House, the more moderate a candidate it tends to nominate. The logic here is pretty intuitive. Just one term out of power, a party might see the most recent election as a fluke, the product of a bad candidate or bad times. "The White House is rightfully ours," they might think, "so there's no need to soften our stances. Just put up a less flawed candidate in a less crazy year and we're back in." Of course, that doesn't always work, so with each subsequent term out of power, they get hungrier for the White House and are willing to compromise more and more of their agenda to get it. At the extreme (five terms out of power), they're willing to nominate someone like Eisenhower, whose policy views and even party registration were a complete enigma until the summer of the convention. "Who cares what he stands for? He might win!"

There's evidence of this same trend in other countries and at the state level. Just think of the California Republican Party's backing of Schwarzenegger in the 2003 recall despite his being well to the left of most of the party regulars.

Anyway, if you're a betting person, the above history tends to point to a Perry candidacy rather than a Romney one.

Anyway, if you're a betting person, the above history tends to point to a Perry candidacy rather than a Romney one.

I agree in general, but the CW seems a bit off, in my opinion: I don't think Romney and Perry are that far apart ideologically. The latest Poole/Nominate plot puts them closer together than most people would guess, at any rate.

Romney obviously has a more liberal policy background, but it's also true that Perry's policies in Texas are more liberal than most seem to be giving credit.

I would suggest that a decent fraction of the space between them, right now, is just amplification of the Downsian approach they are taking; two candidates standing very close to each other, but casting their nets two different directions.

If the examples were Bachmann and Hunstman, I think it'd be spot on. And I think it's right to estimate a Romney Presidency as much more liberal than a Perry one. And in the race for the establishment backing, I think the CW holds. But to the average voter? I don't see a ton of daylight between them right now.