Get your nerd on

Iowa Caucus day. I can't tell you how jazzed I am. I don't have a whole lot to say so far that hasn't been said elsewhere, so I'll just link to some of the better recent posts. But I will post this recent polling chart, noting that the Ron Paul wave has probably already crested and that Santorum probably timed his wave about as well as possible... maybe just a few days too late. 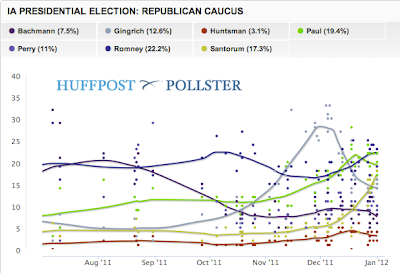 Not that he really did anything to cause this wave to happen, or course. Near as I can tell, Santorum's been saying and doing roughly the same things for months. I saw him briefly interviewed on Fox last night, where he was asked why he's been rising in the polls. He didn't know. That's not a dig on Santorum. It's just a sign that what's going on out there has very little to do with the candidates' actions and a great deal to do with voters and activists still desperately seeking a conservative alternative to Romney. It also reminds us that if the anti-Romney activists could somehow unite on a single candidate, they could probably win this thing. But we've seen little evidence that they're capable of doing that with the given field of candidates.

So, I haven't read this kind of commentary or analysis in big media yet, but I don't see how you read the Iowa results any other way than that it makes Romney's nomination inevitable. After the campaign to date was nothing if not a deathless search for a viable Romney alternative, in the state that was the least favorable ground for him to fight on, he won. If he could win under those circumstances, there's nothing to stop him. He can write his convention speech now.