The good folks at Democratic Convention Watch have been keeping tallies of the Republican superdelegates (or "automatic delegates") who have pledged for the various candidates. This distribution looks a lot like the others: 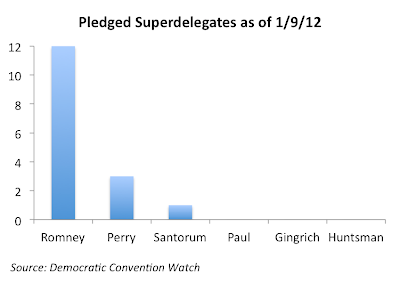 Some important points to note here. First, as with most other indicators of insider support this year, a lot of people are remaining publicly neutral. There are still 118 superdelegates (89% of the total!) who could pledge toward a candidate but have not yet done so. Maybe they just haven't made up their minds, maybe they lean Romney but are scared of possible blowback if they publicly endorse... it's hard to say.

Second, the distribution above again convinces me that Rick Perry remains the only viable alternative if Romney somehow falters. Yes, his public performances have ranged from abysmal to just passable, with the median being closer to abysmal. But he still has the broadest insider support after Romney and would probably be the easiest for the party to rally around.


Update: Another way of looking at the above data: 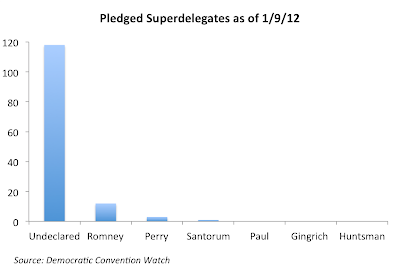 We have sixteen pledged superdelegagtes. Three to Perry, one to Santorum, and twelve to Romney. And, 118 unpledged.

You should not be reading anything so consequential into the four non-Romney superdelegate counts. One of Perry's superdelegates is presumably him - I would think that a sitting Republican Governor is himself a superdelegate.

Perry is not a superdelgate. (He would be if he were a Democrat). RNC supers are limited to 3/state: the state chairman, and 2 nationalcommitteemen. - Matt from DemocraticConventionWatch.

Thanks for the detail Matt, although the basic point still stands.