Here's a graphical comparison of Romney's performance in the Florida primaries of 2008 and 2012 among different demographic groups: 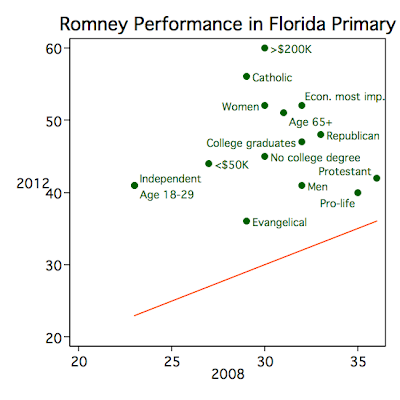 The red line is where Romney's support would be if he'd done the same in 2012 as he did in 2008. Obviously, he did much better overall, garnering an estimated 46% (as of 11:30 EST) as compared to 31% four years ago. And he improved in all the subgroups I've charted above. But he improved in some quite a bit more than in others.

He seemed to make the greatest inroads among the wealthiest voters, Catholics, women, the elderly, and those who believe the economy to be the most important issue. He made his weakest gains among Evangelicals, pro-lifers, men, and Protestants.

The gender gap strikes me as an interesting story this year. There was an enormous gender disparity in turnout in 2008, with men outpolling women 56-44. This year, the electorate was just about even between men and women. In 2008, meanwhile, Romney got 32% of men's votes and 30% of women's -- not much of a difference. This year, Romney got 41% of men and 52% of women. (Gingrich seems to have attracted men to his campaign much more than women.)

You have neglected to mention that the GOP voter turnout for 2012 was less than 2008. Care to comment on not mentioning this, or speculate on the effects this would have on your chart? Just asking.

Ray, I haven't really looked into that. Obviously, the different turnout would have some effect, but I don't have a good sense yet of which groups saw the bigger declines in participation.