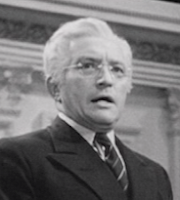 Try thinking of it in aristotelian terms (modified). Society can be governed by the few or the many, and government can be enlightened or selfish.

The best form of government is enlightened popular rule, with a population of citizens who govern themselves well by voting and behaving as if their only concern was the good of the polity.

The second-best would be rule by a benevolent dictator who overrides the selfish or ignorant tendencies of the general population with firm, enlightened wisdom.

The worst form would be rule by a selfish despot who uses the power of government to increase his own pleasure and power.

3rd best is what we've got: voters who are often selfish and/or ignorant and a system of rules that binds politicians to such voters. In doing so we lose out on the full benefits of a great leader (e.g. Redford's character at the beginning of The Candidate) but we avoid (or punish) politicians who are completely corrupt. That is, we force our politicians to heed our wishes, then we spend our time wishing that Britney wasn't so, you know, trashy that we can't tear our eyes away.

Surely someone has studied people serving in elected office by appointment. Do we know if they behave like Mr. Smith? Did the Johnson and Ford presidencies, for example, share any characteristics that were tied to how those guys arrived to the office?

Good question, but I don't think we'll get any leverage on it from the presidency. Ford was the only one who got in there without winning a national election, and his behavior can't tell us a whole lot.

There is some literature on the way termed out legislators behave in their final term. They shirk. That is, they're less likely to follow district public opinion when the reelection incentive is gone. There's no clear answer as to whether that's a good or a bad thing. Shirking can be an act of political courage or one of selfish stupidity.

Bush is termed out right now and is currently shirking public opinion on the war. Is this stupid or courageous? Depends who you ask.

Responding to Anonymous up above, doesn't our theory of democracy suggest that we needn't distinguish between selfish and enlightened voters? That is, isn't the whole idea that millions of people pursuing their own private ends wind up enhancing the public welfare? Maybe I'm reading too much Adam Smith into my James Madison, but I'm a bit ooged out by the notion of leaders basing their decisions on their impression of whether voters were being selfish or public-minded in the last election.

I see your point about Hollywood fantasies, but wouldn't it also be possible to produce a fantasy in which an election makes politicians better rather than worse?

"I see your point about Hollywood fantasies, but wouldn't it also be possible to produce a fantasy in which an election makes politicians better rather than worse?"

Possible, yes. That would mean a script in which a fundamentally corrupt person runs for office and is "cured" by the act of campaigning. Usually, I would think it would be difficult to convince the audience that elections are redeeming. However, isn't that the gist of Eddie Murphy's "The Distinguished Gentleman"?

I should add that there are some movies about the corruption of politics but the end result is that good folks run for office themselves, e.g. "City Hall":