Kudos to John Sides for taking on Carol Darr's silly claims about class differences. To wit:

Since most Republicans live in rural America, where they are less likely to have broadband Internet, “we’re not fighting with a fair piece of the pie,” [“Republican Internet strategist David] All says. [Carol] Darr [a professor at Harvard’s Kennedy School] also points to differences between the parties. “The people who are white and working-class tend to be Republican, particularly those who are white, working-class, and religious.” She characterizes Democrats as “ostensibly being the part of the poor and working class, but they end up being the yuppie party and most people at universities tend to be Democrats.”

Sides, along with several commenters, succeeds in demolishing all these claims. But then, proving that Sides' blog is much more popular than mine, Darr herself joins in the fray, ending with this comment:

My thoughts about the class divide between Dems and Republicans are summed up by a quote that I've always thought was attributable to Ambrose Bierce (but I can't find it in his "Devil's Dictionary):
"The problem with the Democrats is that they say they're for the poor and they're not; and the problem with the Republicans is that they say they're for the rich, and they are."

Sigh. So now we've gone from claiming that Republicans represent common folk better than the Democrats to the idea that there are no class differences between them. Poppycock. (Sorry to use such harsh language.)

Whether that quote came from Ambrose Bierce or not, it is plainly untrue today. When was the last time a Republican ran for office claiming to be for the rich? There are a lot of mistakes in Frank's "What's the Matter with Kansas," but one thing he gets exactly right is the modern Republican rhetorical style: the reframing of class without reference to income. Republicans describe themselves and their supporters as the salt of the earth while painting Democrats as elitists.

Republicans are obviously free to say what they want, but reporters do their readers a disservice when they buy into such false claims. There are profound and easily verified differences between the two parties in terms of class.

What's more, which party governs has important consequences for the economy. As Bartels demonstrates, poorer Americans see much greater income growth under Democratic presidents than under Republican ones. He produced this graph. Learn it. Know it. Live it. 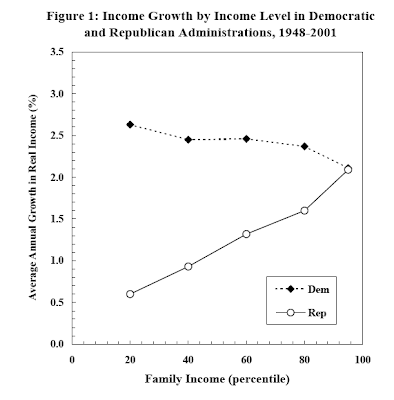