Polarization in the California Assembly

I recently updated my animated movie of spatial plots of the California Assembly from 1901 to 2003. Keith Poole provided the code, which I tinkered with a bit. The plots show the first two DW-NOMINATE coordinates. The horizontal axis represents the left-right dimension. The vertical axis represents, well, whatever it represents. Usually, at least for California, it's a geographic dimension, pitting north against south. Today, the second dimension is virtually nonexistent. But the really interesting thing is the left-right polarization, particularly after the end of cross-filing in the 1950s. 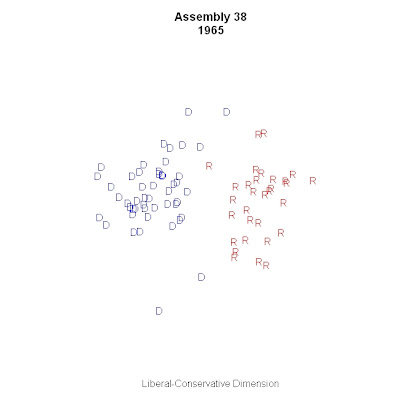