Some of the coverage of yesterday's failed bailout bill vote has described it as a "coalition of the extremes" vote (or a CoFex, a term coined by Wesley Hussey), with the center largely favoring the bill and the extremes opposing it. As the Washington Post's Dana Milbank wrote:

After the shocking vote of 228 to 205, party leaders did their usual rounds of partisan finger-pointing, but it really wasn't a partisan issue at all. The center had collapsed in favor of a coalition of far-right and far-left zealots.

That's actually not the way it looks when you break the vote down by members' ideal points: 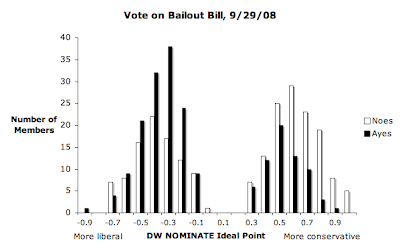 There's definitely somewhat more opposition out in the extremes than toward the center, but it's not a particularly striking pattern. The more telling indicator of the vote is that retiring members voted overwhelmingly for it and members in competitive districts voted overwhelmingly against it.

Update: Diane Watson opposed the measure, while Maxine Waters supported it, even though they have similar voting records and represent similar, adjacent districts. Those two can't agree on anything.
Later update: Milbank quote added in above.

Thanks for the shout out Seth. No COFEX vote is ever perfect, but I believe this does a good job of qualifying statistically and theoretically: the extremes vs. the leadership.

I'm just happy I have a new big league example. The 1990 Budget Vote was getting a little tired.