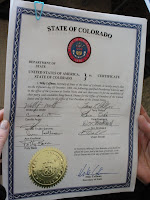 The Colorado Democratic Party held a reception yesterday for the state's nine electors, who cast their vote for Barack Obama, and I got to speak with a few of the electors. The electors met at the governor's office, were sworn in by the state's chief justice, and then each cast their individual votes. The outgoing secretary of state (Mike Coffman, a Republican who just got elected to Congress), certified this vote with the lovely document you see at left. Each elector got a copy of the document, and the originals were sent to the U.S. Senate, which will certify the vote, and to the National Archives.

I've been teaching about the electoral college for a lot of years, but I had to sit down and talk to some electors before I had a sense of what actually goes on. I was a bit disappointed that the entire college doesn't actually convene somewhere. I know they wouldn't actually deliberate, but it would be a nice nod to the intentions of the framers.