Another fun networks research project: Ramiro Berardo at the University of Arizona did a study of people who attended last year’s Harvard networks conference. He sent out a survey asking us with whom we regularly consulted about writing papers and doing networks research. He presented some of his findings yesterday in a presentation called “Networking Networkers.” I’m really sorry I missed the presentation, because he used my name in one of his graphs. As you can see, I’m one of the more central nodes in networks research! 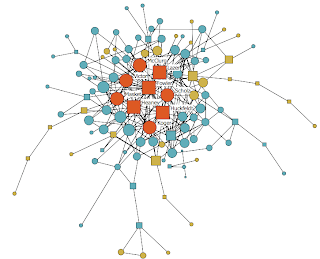 Here’s how Berardo explains the graph:

The picture portraits the networks of advice exchange, with blue nodes being political scientists and yellow nodes being scholars from other disciplines. Further, squares are nodes that function as cutpoints (if you remove them, parts of the network become disconnected). Finally, the red nodes are the most embedded individuals in the network according to the "cohesive blocks" algorithm devised by Moody and White (2003). All of them are political scientists.

I’m only a red circle. We’re highly central but expendable. Maybe someday, if I work hard, I’ll be a square.