This is a followup to my previous post analyzing the votes on caucus night in Colorado last month.  I'm still trying to gather results on the county assemblies, something that's proving very difficult to do (although thank you Dan Willis).  For now, though, some interesting patterns have emerged from the caucus votes.

One pattern, which is perhaps not so Earth-shattering, is that Ken Buck did better than Jane Norton in more conservative counties during the March caucuses.  McCain's presidential vote in 2008 is a reliable predictor of Buck's successes.  This result is statistically significant (p ≤ .05) and holds even with all the control variables I could throw at it. 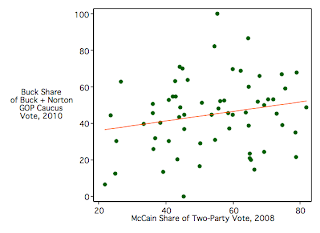 Interestingly, county ideology played no role in the Democratic contest.  Liberal counties were just as likely to go for Romanoff as for Bennet.