Over-representation in the electorate 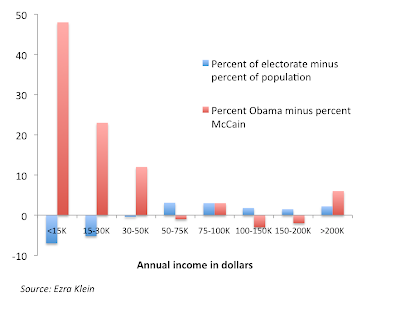 The chart nicely shows that the most under-represented segments of the population are, in fact, the most Democratic.  (Ezra calculates this cost Obama 2.3 percent of the vote.)  Interestingly, the most over-represented groups are not the wealthiest, but those making between $50,000 and $100,000 a year.

You forgot to rescale by the size of the income cohort. 220K+ people are 6% of the electorate and 3.8% of the population, so their voting representation is 158% of their population share.

By the same scale, the voting power of the poorest cohort is under half of their population share.