Several months ago, Brendan Nyhan took issue with political commentators who were urging Obama to campaign more like Reagan.  Jon Judis, in particular, had argued that economic models in 1982 had predicted Republican House losses of around 50 seats, but Reagan's communications skills limited Republican losses to only 26.  Brendan argued that this was silly -- that midterm elections tend to turn on the fundamentals rather than the president's political skills.

Of course, I'm in sync with Brendan on this point, but when I look at my midterm data, I find that 1982 really was a significant outlier.  Below is a graph showing how the president's party did in every midterm election since 1950 relative to my forecast (based on growth in real disposable income and the president's popularity).  Each data point is the actual gain in seats minus the expected seat gain.  So positive numbers means the president's party did better than expected, even if they still lost seats. 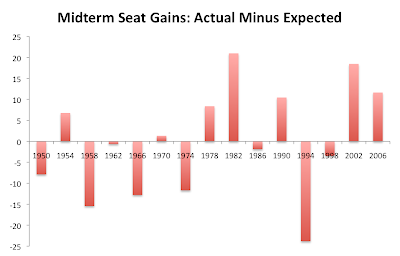 Interestingly, 1982 is the biggest positive outlier in the whole series.  My model forecasts the Republicans losing 47 seats that year, but they only lost 26.  How did they pull that off?
Some possible explanations: