When compromise is wrong

Susan Schulten has another great piece up on the NYT's Civil War site.  This time, she writes about the failed Crittenden Compromise, a last-ditch effort to avoid the Civil War by extending the border between slave and free states all the way to California. 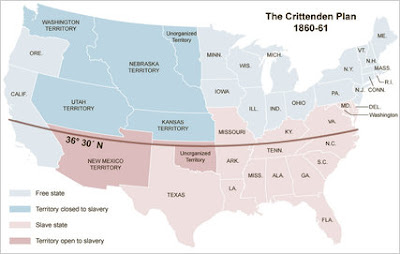 The compromise failed, at least in part, because of President-elect Lincoln's opposition to it.  After all, the compromise would have allowed the expansion of slavery -- something that the Republicans' 1860 platform specifically opposed -- and, as Schulten writes, "he did not want to appear as someone apologizing for having won office."

It's interesting to imagine, though, what would have happened if it had succeeded and actually prevented war. Lincoln surely would have been pilloried by the abolitionists but praised by whomever the 1860 equivalent of David Broder was. And, no doubt, Lincoln's refusal to compromise was, in some sense, reckless, hastening war. But 150 years later, Lincoln's partisanship and obstinance seem like the proper course; bipartisanship would have been immoral.

"bipartisanship would have been immoral"

Compromise for now is not compromise forever. A compromise in 1861 would have been the end of it, any more than the 3/5th compromise, the Missouri Compromise of 1820, the Compromise of 1850, or the Kansas-Nebraska Act did. Presumably, the abolition debate would have raged on. Presumably, sooner or later, slavery would have ended as it did everywhere else in the developed world. In all probability, slavery in New Mexico territory would have been rare, simply because it wouldn't have had comparable economic value there, so it might not have meant much of an expansion.

Realistically, it would have taken more than a decade after a compromise like that to end slavery, and as some point, ending slavery sooner at a great price in blood would have been worth it. But, there is no exact tool to measure precisely how long would be worth it, and the decision makers at the time couldn't have know how long the compromise would have lasted.

It most certainly would not have been the end of it. It should be pointed out that the remaining southern territory was useless for agricultural purposes. The compromise line would have quelled debate only for as long as the Southern Anglos delayed in making the rest of Mexico part of the United States and expanding slavery into that area as they did in Texas.

Respectfully, check out the Corwin Amendment. That would have been compromise, forever. And technically, it's still eligible to be passed - it has no expiration date, so it could theoretically be part of the Constitution.

The framers of the Constitution doomed the document with slavery, and we have been living with the consequences ever since. Lincoln's solutions to rebellion and slavery, however understandable, left us with a legacy of centralized power corrosive to individual freedom. It took power from the states and ultimately has given it to corporations, often under the guise of protecting us from those very corporations.

Now in my state Governor Jerry Brown is trying to radically scale back the bloated progressive ambitions of yesteryear with a major decentralization of power, giving it back to the counties, who will have to set their own priorities and make their own decisions about how much they want to spend on government services. I hope this is a trend that spreads to our federal government also, as the best available austerity solution and as the best way to overthrow our corporate masters. Decentralization would also have the effect, I think, of toning down the polarized, uncompromising atmosphere in our current political climate.

Unfortunately, California Republican legislators have taken a pledge to make no compromises regarding taxes, imperiling the Brown plan. Even Reagan could compromise on taxes in times of crisis.

Slavery, however, was not amenable to any compromise. The Corwin Amendment isn't a bad idea as long as the decisions being left to local populations aren't so explosive that they spark civil wars. Like other freedoms that were considered essential to keeping the union and Constitution stable and healthy, the right to not be owned should have been in the Bill of Rights. Instead, we made a deal with the devil and we're still paying the price.

In answer to the first comment, I don't see any reason to believe that slavery would have ever ended without a war. Southern slaveowners were not going to give up what was a good thing for them unless someone made them.

A historian made the point about a week ago in the Washington Post that there's no reason to believe that slavery might likely have lasted well into the 20th Century. It's true, we'll never know, but southern slaveowners were not the most willing bunch of guys to compromise.

If David Broder had been writing in the 1850s and 60s, he no doubt would have excoriated the uncivil abolitionists for now being willing to work with the slaveowning southern politicians. The fact that Broder would likely have disapproved of Lincoln is reason enough to admire him.