Comparing politicians and their districts

Are elected officials good representatives of their districts? That's actually a difficult question for political scientists to answer, in part because our measures are poor. We have plenty of good measures of the partisanship of elected officials, most of them deriving from roll call votes. We also have good measures of the partisanship of voters, most of them deriving from surveys and election results. But directly comparing voters and politicians is hard when we don't have a common scale.

Hans Noel and I try to remedy this in a new article (gated or ungated, PDF) in Political Research Quarterly. Our approach is to examine votes on legislative referenda in California. That's when state legislators vote on a bill and then send the exact same text onto the voters -- it's one of the only times that voters and politicians are voting on precisely the same thing. We use these referenda votes as "bridges" between legislators and their districts. Then we can put legislators' roll call votes and districts' votes on initiatives onto the same scale and generate comparable ideal points for districts and legislators. 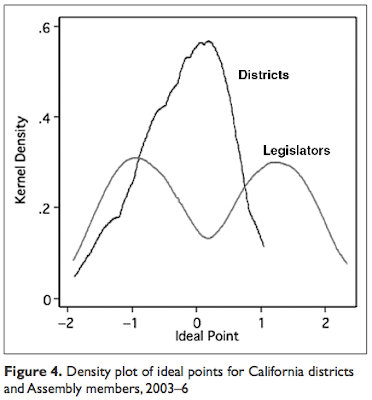 The point you make is a quite profound and fudnamental one, and I explore its causes and potential solutions at a post at my blog.

Interesting work. As I am sure you are aware, we have passed two reforms in recent cycles here in California. An Open top two primary system and redistricting removed from the hands of the partisan legislators with citizen panels now empowered to draw district lines. While there has been a great deal of analysis and speculation on how these individual reforms may impact elections, there has been little work that I have seen about the potential amplifying effect of the combination of the two. It strikes me that this is an electoral experiment on a grand scale that should validate your conclusions - or not.

The conventional wisdom is that the new redistricting will create districts that are more likely to reflect your centrist dominated bell curve, and for districts that do have a heavy partisan slant, the dominant party will likely win both top two spots with a single party competition to be more centrist and draw the disenfranchised party voters who have no candidate appearing in the General.

It strikes me that the combination of these two effects will be greater than the sum of the parts with a potential 2+2=5 result.

Instead of partisan competitors competing to show who is the more true to the ideological party principles and attractive to the hard-core partisans in their party in a closed primary, the strategy for candidates will be to try to grab the bell curve middle of both parties.

Possible unintended consequence - "Top two" candidates with minor or no policy differences in the general elections, resulting a choice that is no choice, and increased voter ennui ("Who cares who wins? They're exactly the same") and further erosion in voter participation. There is a historical pattern in the US of participation correlating with polarization and partisanship.

Like I said - A radical political experiment on a grand scale.

MW, I'm curious to see what happens. My own research suggests that these reforms won't have much of an impact on state legislative polarization. The top-two primary isn't likely to depolarize much, although maybe it will have some effect on the margins. And gerrymandering has only the tiniest effect on polarization. But, hey, maybe the two working in concert will do something.