Steve Greene and I have been working on our analysis of the effect of roll call votes on the electoral fortunes of Democratic House incumbents in 2010. (See this previous blog post for details.) We've put this research together into a paper that we're presenting this weekend at MPSA.

For the paper, we look at the impact of four roll call votes: health reform, the stimulus, cap-and-trade, and the TARP bailout from 2008. We find that a vote for health reform was very costly for Democrats, reducing reelection margins by six to eight percentage points. This cost at least thirteen House Democrats their jobs. We find a smaller, but still statistically significant, effect for supporting TARP. The stimulus has a mixed effect, harming Democrats in more conservative districts but possibly helping them in more liberal ones. We found no overall effect for cap-and-trade.

Here's my favorite graph from our paper, showing the estimated impact of the health reform vote on Democrats' likelihood of reelection. The patterns are generated by a logit equation and show how Democrats from a broad range of districts fared in 2010 based on this one roll call vote. For example, in a district where Obama got 40% of the vote in 2008, a Democratic representative would have a 54 51 percent chance of retaining her seat if she opposed health reform, but only a 19 an 18 percent chance if she supported it. 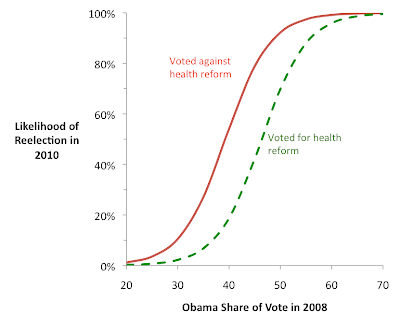 Steve and I are going to meet with Eric McGhee, John Sides, and Brendan Nyhan about their research on this topic to figure out where we agree and disagree. We'd talked about meeting for beers, but it's a morning meeting, so we'd best stick with wine.
Late update: A few folks noted a slight coding error in the original paper. We've updated the paper accordingly, and the results are substantively identical. I've corrected the above post as needed.

C'mon guys--mimosas or bloody mary's for breakfast. What planet are you guys from?

Hey Seth,
First, a great graph. Second, a quick heads up-- I played with these data a few months back and the results for several of the individual roll call votes (including health care) disappear once you control for party unity. My reasoning is that a la Carson, Lebo and Koger, the public doesn't actually know very well how their individual members voted on these issues, but that they do have a sense of how partisan they are. (However, I think I was missing a handful of election results at the time, but I would be surprised if it made a difference).

This explanation is consistent with some evidence in my book which shows that few citizens could identify how their senators voted on the the Clarence Thomas nomination (which obviously was very highly covered).

I had hoped to run into you to discuss it, but alas it must wait for another time.

Anyway, good luck with the project. Its especially interesting to me because it speaks to questions of democratic accountability, about which there is too little research.

Well that's disturbing. Were you controlling for ideal points in that analysis?

If only there had been a progressive political weblog site that had predicted this outcome via polling! Oh, wait -- there was: Firedoglake, who was shunned and attacked by Team Obama and the Democrats for suggesting such a thing could ever happen.

And yet it did.

TeddyPartridge, do you have a link for that post?

Thanks for the links, Terry. Those posts, like a number of others at the time, were quite correct that the vote would prove costly. Democrats had lots of polling suggesting this vote would hurt them in November, and I think most members knew they'd pay a price, even if most underestimated that price a bit.

I disagree with Walker's claim that Democrats could have saved their House seats by making the bill more popular through the inclusion of a public option or other features. There simply weren't 60 votes in the Senate for a public option. To the extent that option was popular, it was only because Republicans weren't attacking it as vehemently because Democrats had largely taken it off the table. Republicans were going to demonize no matter what proposal Democrats put forward, even if the proposal looked a lot like the health reform plans championed by Bob Dole and Mitt Romney a few years earlier.

As a political operative, I would say any analysis that claims the public doesn't know how their member voted on key legislation is fatally flawed. Probably includes all MoC where the statement may be true. But in any of the competitive seats, meaning those that changed hands of the final vote was within 4% of a change the voters very much knew the votes on big issues.

Anonymous, given what we know about voter knowledge, I really doubt your claim that "the voters very much knew the votes on big issues," but this is an empirical question. At some point, I'll need to look at polling data in the most competitive districts to answer the question of whether "the voters" (a majority of voters? all voters?) actually knew how their member voted on TARP or whether they would just use party as a heuristic.

One thing that this paper really doesn't get into is the mechanism of how a "bad" vote translates into declining vote share. We're hoping to look at this in the near future. My guess is that health care supporters were more likely to draw high quality opponents and independent expenditure funding directed against them.

Bill Halter is a Democrat, not a Republican as your paper mentions.

Cast, thanks for the catch. Error fixed.