A Dune Sea of red ink 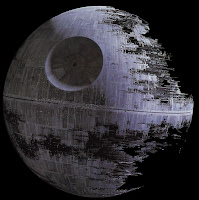 If you haven't read this discussion on the economics of using the Death Star to destroy a planet, you really, really ought to. The writers have some very useful insights on why destroying Alderaan might make sense as a warning to other systems, even if it was costly in the short run. (Ever wonder why the Rebels were holed up on Hoth in Episode V? Because all the decent planet were too scared to give them shelter post-Alderaan.)

But there's a bigger issue here that I think needs addressing. Where did Palpatine get all the money? He apparently authorized the creation of the Clone Army (and all of its equipment, including some very large and costly star destroyers) before he was even emperor. And neither the Senate nor the Jedi Council knew about these expenditures until the clones just showed up. Surely the cloners wanted to see some kind of money up front.

On top of that, by the end of the Clone War, Palpatine's begun construction of a Death Star, something that is estimated to cost $15 septillion (although I think could be purchased for a few quintillion). Sure, it's far from completed, but he still would have had to purchased the raw materials, hired the laborers, etc. And we still see no sign that the Senate or the Council knew anything about it. (Remember how shocked Obi Wan was to learn of its existence in Episode IV?) Where did this money come from?

Frankly, it's amazing the Republic lasted as long as it did with such horrible budgetary oversight.


Update: Good point from David Bernstein that a vibrant media (all but invisible in Lucas' movies) would have shed light on this scandal early on. Similarly, the Trade Federation's denial of their invasion of Naboo in Episode I would have found fewer adherents had there been a single news crew there.