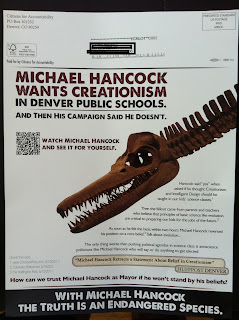 A while back I wrote about some of Denver mayoral candidate Michael Hancock's recent campaign flubs, including one in which he he said that intelligent design should be taught in schools. (He quickly retracted that.) Not surprisingly, his opponent, Chris Romer, has put together some direct mail pieces hitting him on this. You can see a picture of one of them at left.

Here's something I found innovative: you see that QR code on the center left? It links to a video of Hancock's debate appearance in which he made the offending statement. Say what you want about negative ads, but this is about as well-sourced as they get.

Direct mail and email marketing both play good role in business marketing. Direct mail gives an additional benefit that is visibility greatly improves the awareness of your product or service with customers. It helps to expand more sales.

There's certainly a great deal to find out about this issue.
Direct Mail Marketing